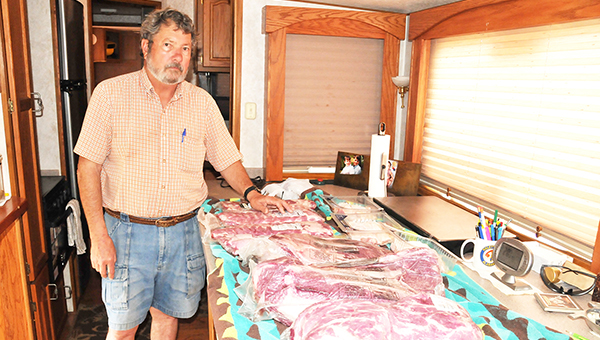 John Swift stands next to the meat he used to smoke at the Smokin in The Square event in Pensacola, Fla., over the weekend. | Andrew Garner/Atmore Advance

Cathy Swift couldn’t talk much late last Thursday morning because she was busy getting her husband’s custom-built Peterbuilt Kingsley Coach turned camper and smoker ready for this year’s slate of barbecue competitions.

Cathy and her husband, John, both of Atmore, competed in Smokin in The Square, a state tournament that brings the nation’s best meat smokers to Pensacola, Fla., last weekend.

The event, which was held on Saturday, drew some 45 competitors.

John, who is a master barbecue man himself, said he’s been competing since 2001, when he had the chance to cook for the Cerebral Palsy of Mobile contest. He’s won several championships.

John said he’s done some 26 contests in one year. He’s slowed down a little bit to spend more time with his family.

“Most events are for charity,” John said. “I’m not in it for the money. It’s the barbecue family.”

Walking back and forth between campers parked in John’s back yard, Tommy Houston was in search for an ingredient for one of his marinades.

Houston, of Martinsville, Va., and his wife, Lisa, also compete in barbecue competitions.

Houston’s Checkered Pig team finished second overall and was crowned as the reserve champion at the Smoke in The Square tournament.

“They judge on appearance, taste and tenderness,” Houston said about the competition’s judges.

Houston, like John, entered into the pork, brisket, chicken and pork ribs categories.

Houston said the judges score appearance and tenderness at 25 percent each. Taste is 50 percent.

He said the key is to present the meat in a beautiful way. Lisa was tearing green leaf lettuce for the presentation.

Six judges make the final call on whose barbecue is the best, Houston said.

“You are feeding six individual judges,” he said. “Each judge gets a sample.”

Houston said judges won’t eat the entire piece of meat. Instead, they take one bite.

“You’ve got to blow them away with that one bite,” he said.

Houston said he started competing in 2002. He has won eight grand championships, and finished as the fourth overall team in the country at one time.

The routine to get ready for the competition is similar among teams.

Usually, two days before, Houston trims his chicken, pork and beef. John trims on Friday, the day before the competition.

To make sure their meat is cold, raw and unseasoned, judges inspect competitors’ meat the morning on the day before the competition.

Houston said he lights his barbecue pit at around 9 the night before the competition, and loads his brisket between 4-4:30 a.m. the next day.

When the Houstons aren’t competing in barbecue events, they are the owners of barbecue restaurants in Martinsville.

Houston finished eighth in brisket, 21st in pork, second in pork ribs and 10th in chicken.

The chicken is the last thing that goes on, he said.

Each competitor has his choice of what type of meat they use. Some use top-grade beef.

Cathy competed in the Anything Butt category as she prepared her seafood lasagna.