Known as the owner of Escambia Drug Store, Barnett was unlike any other, long-time employees said. 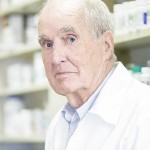 “He was a great man,” Pharmacy Technician and Store Manager Tracey Slate said. “I spent more time with him that I did at home.”

Slate said it was great to work for Barnett.

“A lot of people saw the serious side of him, but there was a jokester in him,” she said, adding that she and Barnett would always prank the regular coffee drinkers at the store.

“He was a well-rounded guy,” Slate said. “I’ve never met anyone like him before.”

Barnett graduated from Escambia County High School in 1951. In 1950, he led the Blue Devils to an undefeated season as their quarterback.

Upon graduation, Barnett went to Auburn University, then called Alabama Poly Tech. During college, he was drafted to serve in the Korean War in the U.S. Army.

Barnett was sent to lab tech school in Fort Sam Houston in Texas, and then to Atlanta, Ga., to Camp Stewart to be in charge of the morgue.

He returned to Auburn in 1955, married his wife, Nancy Jones Barnett, and graduated in 1957 from pharmacy school. During his time at school, Barnett would come home on weekends to work at the store.

“He and IG Nichols would ride together on weekends,” Barnett’s daughter, Kim Tatum said.

Barnett moved back to Atmore following his graduation and began to work as a pharmacist at the drug store. Additionally, he was also a pharmacist at Atmore Community Hospital and Fountain Correctional Facility for eight years.

Barnett purchased Escambia Drug Store from his partner in 1980, and worked there up until the day before he died. He was a pharmacist for 57 years, and was one of the only two in the state that had practiced for more than 50 years.

“All he knew was this store,” Tatum said. “At one time, he had three jobs. He loved it.”

Slate, who has worked at the drug store for 25 years, said Barnett was the type of person who would get out of bed to fill a customer’s prescription, if need be.

“He cared for other people more than himself,” she said.

Slate wanted to let everybody know that the store is still open, and that it will not be closing.

Because of his service to the community through his drug store, Barnett is going to be inducted into the 2016 class of the Atmore Area Hall of Fame on Sat., April 30, at The Club.

Barnett was 83 and leaves behind three children and four grandchildren.