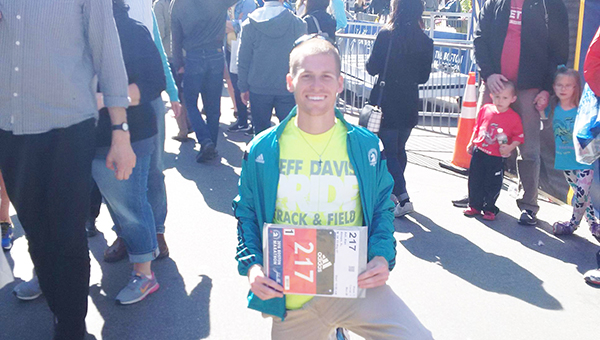 Atmore native Alan Ash poses for a picture in the lead up to the 2016 Boston Marathon. | Submitted photo

Atmore native Alan Ash finished in 39th place of the 2016 Boston Marathon on Monday, finishing the 26.2-mile race in 2 hours, 31 minutes and 16 seconds.

Ash, who is a cross-country coach at Jefferson Davis High School in Montgomery, has ran the Boston Marathon three years in a row. Last year, he finished the race 127th overall, and in 2014, he finished 148th.

“It’s always a special experience,” Ash said about running in the marathon. “There’s a lot of work and training that goes into a marathon. When you get here, it’s a new experience. It’s a celebration of your work and putting that to use. It was special.”

Ash said in his last two Boston Marathons, he’s developed a strategy to improve his times — staying consistent and steady the first 20 miles and pushing it the last six.

There were 30,741 runners who entered the race. Twenty-seven-thousand-four-hundred-and-eighty-seven started the race, and 26,639 participants finished. He was the 15th American to cross the finish line.

The marathon was his second in a matter of around six months as he ran his last in October.

“Usually, I run two a year,” Ash said. “Each marathon cycle is about five to six months. At the beginning of this cycle, I had a hip injury and I started to get better in January and February.”

To train for a marathon, Ash said he aims to run around 100-130 miles a week. The highest he got was 130 miles during spring break.

However, he developed tendinitis during the latter part of spring break and had to hold back to 100 miles before the marathon cycle started up again. He said he fought back to running shape through physical therapy.

Through all his running, the former Escambia Academy track standout said he’s been fortunate to be able to use his gift for a higher purpose.

“I ran in high school, and questioned whether or not I wanted to run after college (Vanderbilt),” he said. “I’ve been blessed. As a coach in Montgomery, I use cross country as something to work toward for the kids.

“I just went through my one-year Bible (program), and I finished on the message on servants and talents, where you can be a steward of your talents. That’s been my approach. God’s given me a gift, and given me my passion.”

Ash said running was in his blood from the start as both his parents, Alan and Dale Ash of Atmore, are runners. In fact, his parents ran in the Boston Marathon in 1987.

“I could see that God was giving me a gift,” he said.

Dale and Alan were present at the Boston Marathon to cheer on their son.

Dale said they were over joyed that Alan finished so high in the race.

“We were there at mile 24,” Dale said. “We were tracking him. They send you texts every 5K. We didn’t know he was going to place as high as he did. We knew he was running really, really well.”

Dale said it was a great experience to be in Boston.

“In Boston, people were cheering the whole time,” she said. “They said there were 500,000 spectators along the course. It doesn’t matter if you’re first or last, people are cheering or ringing cowbells. It’s just very exciting. People are so friendly. It’s a city holiday for Boston. Everybody comes out to support and cheer. You feel very safe.”