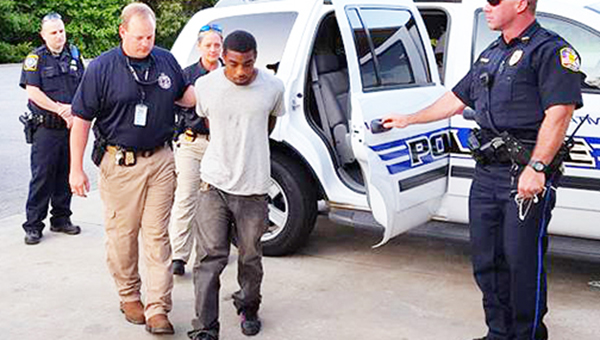 The Flomaton Police Department and other Alabama law enforcement agencies made an arrest Monday night of an Atmore man in the death investigation of Kenneth Harris Jr. of Flomaton.

Devonta DeShawn Rollins, 20, was arrested on the charge of murder following an investigation from the FPD, the Alabama Law Enforcement Agency and State Bureau of Investigation, according to Flomaton Police Chief Bryan Davis.

“During this investigation, it was discovered that the two men had a history of altercations within the past two weeks, during which, they were mutually combative,” Davis said. “Both men had also been in possession of the gun (a 38-caliber revolver found at the scene) in the hours which preceded the shooting.”

Davis said Rollins provided a statement to investigators, and the statement combined with forensic evidence obtained by investigators led to his arrest for murder.

On April 19, Harris was found inside of a Lender Street residence in Flomaton suffering from a gunshot sound to the back of the head. He was pronounced deceased on the scene by the Escambia County Florida’s EMS.

Davis said the FPD found the death to be suspicious, which prompted the investigation.

Harris’s body was sent to the Alabama Department of Forensic Sciences for an autopsy.

On April 21, the FPD, along with ALEA and SBI, executed a search warrant on a vehicle Rollins had been in on the day of Harris’s death, according to the release.

A day later, the three investigating agencies executed another search warrant at 58 Lender Street, where the shooting took place, three days before Rollins was arrested for murder.