Doug Tanner couldn’t pass up an opportunity for a change in scenery and to work for a previous employer at Atmore Community Hospital.

Tanner was recently named the president of ACH, which is managed by Infirmary Health out of Mobile. 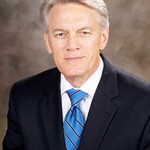 Tanner has been working in the healthcare industry for more than 24 years in hospital operations and managed care. He worked for IH from 1986 to 1995.

He comes to Atmore from Chatom, where he served as the chief executive officer of Washington County Hospital and Nursing Home.

“We’ve been there 12-and-a-half years,” he said. “It kind of snuck up on us that we called it home. We never would’ve imagined that.

“I’m totally confident that we’re going to have the same experience here,” he said. “I’ve met nice people everywhere we’ve been; folks here at the hospital and about town are good people.”

Tanner said what drew him to Atmore was wanting a change of scenery from Chatom.

“I was very attracted to the position,” he said. “I worked for the infirmary for nine years earlier. I’ve been away for quite a while. I still knew a lot of people in that organization and leadership team.”

While Tanner may have been in healthcare for some 24 years, the Mobile native said the industry has been a big part of his family since he was a child.

“When my parents moved to Mobile in 1960, my mother went to work in the operating room as a scrub nurse,” he said. “That organization put — one way or the other — a roof over my head, and helped send me to college and provided food for my family. I was excited about the prospect of coming here and getting the chance to do some things.”

Tanner said the best part about his job is watching those who work for him get better and grow in their roles.

But better yet, Tanner said he feels his role as the hospital’s president is one that entails him working from behind the scenes.

“I’m not a nurse or a doctor, and I’m not going to be sticking needles in anybody,” he said. “Just like the people who work in environmental services and in the kitchen, they’re behind the scenes. I’m as behind the scenes as they are.”

Tanner is married to Lisa, and the couple has one child, Gaines.

An Atmore man has been taken into custody for the shooting death of 18-year-old Kenneth Harris Jr. of Flomaton, according... read more