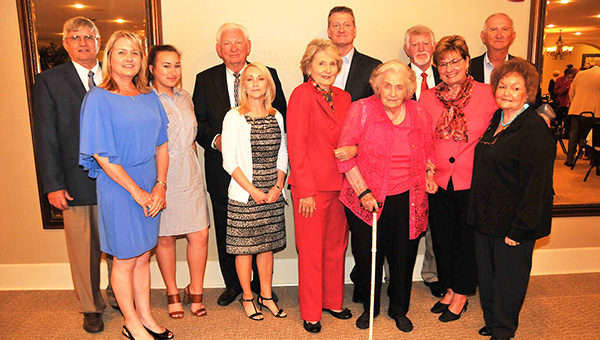 Six of Atmore’s best were inducted into the 2016 class of the Atmore Area Hall of Fame Saturday night at The Club.

Dignitaries from Atmore and Escambia County attended the banquet, which saw a big crowd. 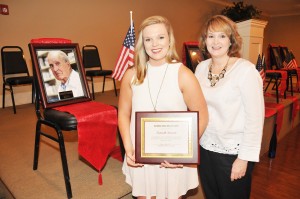 Carl Anderson inducted the late Barnett into the HOF.

Anderson, owner of the Tot Shop, said he shared a piece of a street block with Barnett for a number of years.

“You can’t talk about a person unless you talk about his life’s work,” Anderson said.

“It was an honor to be here for dad,” Taylor said. “He was honored to have been elected in the hall of fame.”

Barnett was a well-known pharmacist, who worked for 57 years. He practiced more than 50 years.

He served in the Korean War and was sent to lab tech school in Fort Sam Houston, Texas. 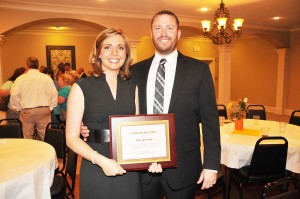 Lori Diller, Garrard’s granddaughter, said her grandfather loved his God, his country and his family.

“We are so honored to be accepting this for him,” she said.

Garrard served in the U.S. Navy in World War II. After graduating college, he moved to Atmore in 1949, and taught at ECHS until he went to work at First National Bank.

He stayed at FNB until his retirement in 1986.

He was a member of several clubs and organizations, and ran for the Atmore City Council. He retired from the council in 2012. 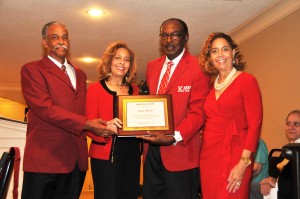 McBride said Harris was instrumental in bringing a chapter of Kappa Alpha Psi to Atmore.

Harris’s son, Steve, said his mother took Curtis out of the city and made him an Atmore man.

Harris moved to Chicago at an early age, completed his elementary and high school education there. While in high school, he played music with the popular Nat King Cole.

He went on to study at Alabama State University, served in the military for more than three years and went on to marry Marcelete Maxine Hollis. The couple moved to Atmore with Steven. Then, in 1953, their twin daughters Patricia and Rosiland, were born.

Harris was the band director and math instructor at Escambia County Training School and Escambia County High School for many years. In Atmore, Harris became actively involved in civic and social organizations, and received numerous awards from the city. 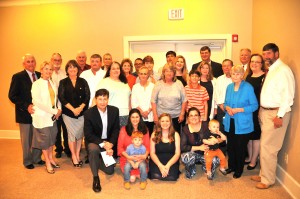 Sanspree was a three-sport start at ECHS, and had a distinguished football career at Auburn University. He was a letterman in 1970, 1971 and 1972, receiving several honors in 1972, including the Auburn National Lineman of the Week, the Associated Press All-SEC Football team and the Associated Press Second Team All-American.

Sanspree graduated from Auburn in 1974 and is currently president of the Seminole Sales Corporation in Birmingham.

“I just want to thank you for the award,” Sanspree said. “This means a lot to me. I don’t have many regrets, but seeing friends, I do regret not coming back as often.”

Boyle, who inducted Zeanah, said the educator has done many outstanding things in education.

Zeanah taught at Escambia Academy from 1982-1984; Flomaton School from 1985-1989; and Gulf Shores. Shen went on to be an assistant principal at GSHS, and at Elberta Elementary School. She then served as principal at EES for 16 years.

She began working as coordinator for the Baldwin County School System in 2014, and was named interim superintendent in 2015. At present, she holds the assistant superintendent position.

“A lot of good memories about Atmore come back,” Zeanah said as she accepted the induction. “Education is the most important occupation to have. I still consider myself a student.”

Zeanah said some 34 years ago, there weren’t many opportunities for women in education.

“This is wonderful, and I accept this for my mother,” she said.

Vickery, a well-known Atmore native, went to Escambia County High School, where he earned 10 letters in football, basketball and baseball.

Upon graduation, Vickery signed a professional baseball contract with the St. Louis Cardinals. Over a 10-year career, he played for the New York Yankees and coached in the Cincinnati Reds organization.

For the past 11 years, Vickery has been a radio talk show host. His show, “Lou in the Morning,” airs on WPFL 105.1 FM. He is also a daily sports contributor for America’s Morning News.

“I’ve pretty much followed dad’s career my whole life,” Lance said. “For me, it’s the memories.”

One such memory included driving Vickery from Dallas, Texas, back to Atmore, right after his father got a welt on his back during a game.

“Throughout my life, Dad and I have had sports together,” Lance said. “Every time he got traded and every time we moved, my mom and I would go to the zoo.”

Lance said his father, who never slows down, is in his “third” career, playing tennis.

“He’s the best senior player in the southeast,” he said.

Vickery said he wants to have one last chance to make a slide to home plate.

“I want to head toward home plate, slide sideways and directly in with a big umpire saying, ‘Safe!’” he said.

It is unclear what effect an $800 million prison bill which passed the Alabama House of Representatives Thursday will have... read more