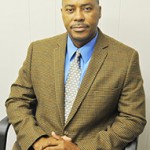 Moore served in the U.S. Army for some 24 years, fighting in the Just Cause conflict in Panama and in Iraqi Freedom.

Born in Hollywood, Fla., Moore moved to Atmore when he was in the seventh grade.

“I finished high school and immediately joined the military,” he said.

Moore said he spent two years trying to figure out what he wanted to do with his life after his stint in the military.

“But, I thought what I really wanted to do was to come back home,” he said. “So, I came back home.”

Moore’s job in the Army was as an automated logistics specialist. He made sure things got to where they needed to go.

Moore said he chose to join the military because he felt there was something greater outside of the walls of Atmore. Additionally, he was a paratrooper as well.

“There’s nothing wrong with the town,” he said. “There’s just something a little bit better that’s out there. I took the opportunity to see the world.”

While in the Army, Moore served in Honduras, Panama, Korea, Japan, Philippines and Thailand, to name a few. He said serving in these countries helped him gain a better perspective on other cultures.

“When you’re not really familiar with other things than just what you know, it was interesting to see different cultures,” he said. “I like the fact that I got a chance to see another culture. It helps you to mature and broaden your sense of other people.”

As the new VA officer, Moore will be the liaison between the area veterans and their families, and to assist them with forms for pensions, compensations and everything that his office has to offer.

“I’m glad to be here,” Moore said. “I’m actually glad to have the opportunity to serve the veterans for this area because they did a lot; not just vets, but their families and dependents.

“I’m looking to forward to serving them and giving back to them, even though I am a veteran myself,” he said. “I want to let them know I appreciate what they’ve done for my country as well as myself.”

Moore is married to Rotongia and the couple have three children, Naser, Kevis and Xavier.