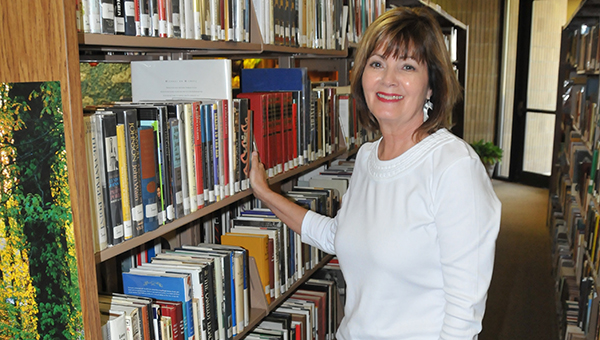 Cathy McKinley stands in the middle of a row of books at the library. | Andrew Garner/Atmore Advance

Cathy McKinley accomplished her goals at Atmore Public Library and is stepping away from the profession she’s grown to love.

McKinley has worked at APL for 26 years, starting out as the library’s computer operator in 1990. She then became secretary and her current position as director in 2005.

McKinley didn’t start out in libraries as she helped raise her daughter.

“My husband owns McKinley Auto Service, but he had to close it down because he has leukemia,” she said. “It closed a year ago. It’s chronic. He got an infection in his elbow and it got into his blood stream, and then into his bones.”

McKinley said she just felt like it was time to step away.

Although her time at the library has flown by, McKinley said she was able to accomplish some big goals.

“I had about 10 big goals that I wanted to accomplish,” she said. “I pretty much fulfilled them. We didn’t have an online circulation and cataloging station.

“We started to build a collection to a somewhat adequate level because it’s never at the level that you would want it to be,” she said. “It’s adequate and we’re constantly building it and working on it.”

“We have a yearly program for adults, similar to the summer reading program (for children),” she said.

Her biggest goal was to get the library involved in the schools.

“We had no relationship with the schools at that time, and so probably five years ago, Marsha Adams at the middle school called and wanted to know if their smart links program could start coming to the library,” she said. “That’s how it began. They came over for a couple of years. We did a summer reading program there and here one summer.”

McKinley said two years ago, A.C. Moore Elementary received a grant, which enabled the school to attend the library for activities.

“They’ve been coming once a week,” she said. “We can see what the kids are doing and what they need.”

Another goal that McKinley helped accomplish was getting computers in the library for public use.

“The Library Partners of Atmore helped with it, and also provided the local match for federal grants we apply for,” she said.

McKinley’s last day at the library is May 27.

“I appreciate everything the mayor (Jim Staff) and the city has done for the library,” she said.