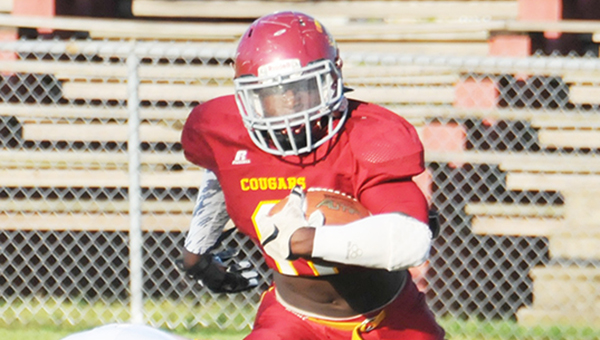 The Escambia Academy rising senior running back committed to the University of South Alabama via Twitter.

Brown finished his junior season with record-breaking numbers on the football field and track.

Brown finished with 1,569 yards on 141 carries and scored 26 touchdowns for the Cougars during his junior season.

In track, he finished as the AISA Class 3A Most Valuable Player at the state meet, and broke an almost 30-year-old 100-meter dash record with a time of 10.72 seconds.

Brown said he chose USA because it would be a great opportunity to stay close to home and show other schools that he’s made his decision.

“It was a good opportunity to go (Division I),” he said. “They opened their doors up to me with open arms.”

Brown said USA was the only school taking one high school running back.

Leading into his decision, Brown said he had two other offers.

While the hard decision is out of the way, Brown said his senior season is going to be difficult because of two reasons.

“It’ll make it easier because I know where I want to go, and it also makes it harder because I know I have to prove myself on and off the field to go to a D-1 school, and to lead the team to a state championship,” he said.

To get ready for the fall, Brown said he is going to gain 10 pounds and work with the team to build on the team’s already established brotherly bond.

“When that bond is stronger, you get better,” he said. “I’m going to pray about everything. If you have faith in God, anything is possible.”