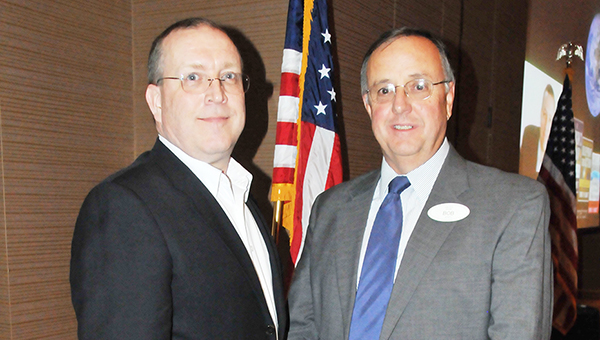 Dr. Thomas Barnett said the United States will be gas-centric in the near future.

Barnett was the guest speaker at the United Bank’s 2016 Advisory Board Dinner at Wind Creek Casino and Hotel last Thursday night.

Barnett is the vice president of Resilient Corporation and Partner Barnett Consulting.

Barnett is a New York Times bestselling author and is a well-known public speaker who’s been profiled on the front page of the Wall Street Journal. He is in high demand within government circles as a forecaster of global conflict and an expert of globalization, as well as within corporate circles as a management consultant and conference presenter.

A key point to Barnett’s presentation was if we were to turn globalization vertical, then it would help sustain economic growth.

“We were in a period where we went through a massive economic boom,” he said. “This was from the 1980s until 2008, when the market collapsed.”

Barnett focused his work on the economies of Asia since the end of the Cold War.

“We need to go from thinking East to West to North to South,” he said. “We can do this by tilting the axis by altering the global climate.”

Barnett said less than 10 percent of the people in the world are living in poverty. Fifty-eight percent of people live in the middle class.

“That’s the biggest challenge,” he said.

With the biggest amount of people living in the middle class, Barnett said it puts a lot of stresses on resources made available.

As humans, we’ve been moving pole ward, either north or south, Barnett said.

“These are the best problems we’ve ever had,” he said.

Barnett said the global economy in the west is stabilized, and the east is “getting there.”

“In the center, it’s unstable,” he said.

One of the major differences that causes the impact of globalization is energy independence, he said.

“We will be able to become gas centric,” he said. “We’re not running out of anything. We are shifting to a gas centric economy.”

Barnett added that the country won’t be hungry for oil in the near future, either.

Other topics Barnett discussed related to growing economies, the increased incarceration rates in countries, the future economy and the amount of natural resources that are still left for use.

Barnett has also written for Esquire, Foreign Policy, Wired, National Review and the Washington Post, and has been interview by the Rolling Stone, The Economist, Time, BBC World Service, CNN, Fox News and numerous other foreign media.

Barnett has been described as one of the most important strategic thinkers of our time.