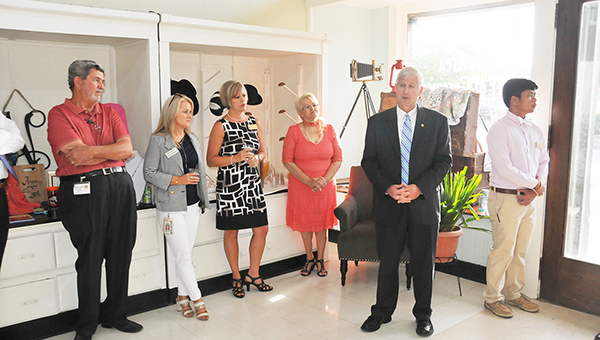 State Rep. Alan Baker said although the legislature may not be in session, there are still a lot of things continuing to happen right now.

Baker was the guest speaker at the Atmore Area Chamber of Commerce’s Breakfast with an Elected Official event Tuesday morning.

Baker reminded those attending that former House Speaker Mike Hubbard was found guilty on 12 of 23 indictments for ethics violations by a Lee County jury recently, and that Speaker Pro-Tem Victor Gaston of Mobile, is the active speaker of the house.

Given that the legislature isn’t in session, Baker said it’s unkown whether Gov. Robert Bentley will call a special session to elect a speaker.

Gaston will remain as the active speaker until another election cycle in two years.

“You can only be in session to elect a speaker,” Baker said.

“The impeachment process is moving forward,” he said. “The state legislature did help to clarify a muddy picture as to what scenario and process we move through to impeach the governor.”

Baker said it’s been 100 years since an elected official has been impeached in the state.

“We don’t have a precedent to act upon,” he said. “The legislature did clean up the process.”

Baker said 21 names have to be signed in order to impose articles of impeachment. There have been 23 signed.

“Once filed, there will be impeachment proceedings that will go to the House Judiciary Committee,” he said.

Baker said the judiciary committee met recently, and will hire a special counsel who will act as a lead investigator on the proceedings.

“Then after that, a recommendation will be made before the House body to move forward or not based grounds to move with impeachment,” he said.

Baker said if the governor were to be removed from office, it would have been because the investigator found criminal evidence.

“It (impeachment) doesn’t mean the governor is going to be removed from office,” he said. “Having made poor decisions or morals are not necessarily reasons to remove the governor from office.”

Other topics that Baker said were of pressing concern for the legislature include the prison construction bill that wasn’t passed recently, Medicaid and the BP (British Petroleum) settlement.

“We still have the prison overcrowding issue,” he said.

Baker said the federal government could come in at any time and take over the prison system in the state. If that were to happen, it would mean a big sacrifice for not only the prison system, but for other agencies, he said.

Baker said if a prison construction bill were to pass, then a feasibility study will be performed around the state to consider what areas are best suited for the super max facilities the governor proposed in his $800 million prison bill.