Pokémon GO game played in, all around Atmore area 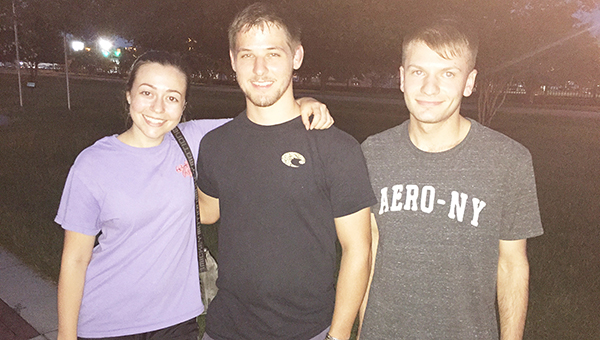 Pokémon GO is alive in Atmore.

The popular game that’s taking the country by storm was released some two weeks ago, and uses exercise and movement as a means to reward gamers. Gamers travel around using their iPhones and Androids and try to capture Pokémon characters. Pokémon GO is built on Niantic’s Real World Gaming Platform, and uses real locations to encourage players to search far and wide in the real world to discover Pokémon, according to the Pokémon GO’s website. Pokémon GO allows gamers to find and catch more than 100 species of Pokémon as they explore their surroundings.

Alex Brown of Atmore, said the game is for all ages.

“Even in a small town like Atmore, there are tons of people playing,” Brown said.

Brown said she sees people outside of city hall playing the game all the time.

“The premise of the game is the more you walk and exercise, the more Pokémon you get,” she said. “That’s the basics.”

Brown said there are Pokéstops, where gamers can get items that’ll help them on their journey.

“Then, there are things such as Gyms,” she said.

Brown said Gyms can be town libraries and churches. Gyms are establishments where three different teams train and battle for ownership.

There are three teams in Pokémon Go — Team Mystic, Team Valor and Team Instinct. All teams are color coded — red, yellow and blue.

“I’m on the red team,” Brown said. “I had the Gym earlier (Sunday) until it got taken over. I’m about to go get it back.”

While the game does get one outside and exercising, Brown said she’s met a lot of people through Pokémon Go.

“It’s a good social thing,” she said. “I’ve met so many friends playing this. Everybody’s so helpful and willing to help.

“It’s not just because I am a girl,” she said. “They’re like, ‘you want pointers?’ They’re wonderful. The sense of community and social aspect is worth the game.”

Brown said she’s walked some 30 kilometers, or just under 19 miles while playing the game.

“It’s not bad,” Reach said. “I didn’t know anything about Pokémon before a week ago. I have to learn as I go. It’s a good time killer. It’s more of a social game to me.”

Colton Singleton, who was also playing the game with Reach and Brown, said he loves the Gyms.

“Meeting people is what I like about it the most,” Singleton said.

Pokémon Go can be downloaded in the App Store or the Android’s app service.