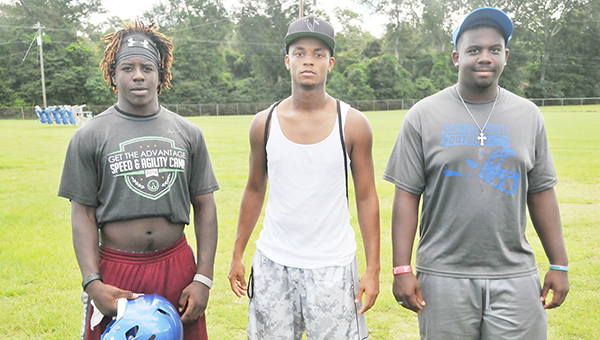 Three Escambia County High School football players got the chance to learn more about the gridiron and to get better in camps at the University of Alabama and Ohio State University.

Jaylan Brown and Anthony Beckham attended the 2016 Nick Saban Football Camp at UA, and Justin Johnson went to a position camp in June at OSU.

Beckham, a senior, said this was his fourth Saban camp.

“It was good,” he said about the camp. “It’s a better improving experience. It helps you learn and get better.”

Brown said the camp was challenging.

“It was my first year going, and it wasn’t hard, but it wasn’t easy either,” he said. “It was challenging. There was a lot to learn.”

“You did a really nice job of grasping the coverage concepts,” one coach wrote.

Johnson said he also had a great experience.

“There was a lot of running, though,” Johnson said. “I learned how to do better routes and get out of jams.”

Johnson said OSU head coach Urban Meyer was present at the camp, and observed the players running through the camp routine.

“His message was to keep working hard,” Johnson said.

Brown said Saban had one word for the campers that helped him and Beckham get excited for the upcoming season — finish.

Beckham said Saban told the campers that it takes commitment, discipline, effort and pride — the four principles and the reason why players hold up four fingers going into the fourth quarter — to be successful.

“Overall, it was a fun experience,” he said.