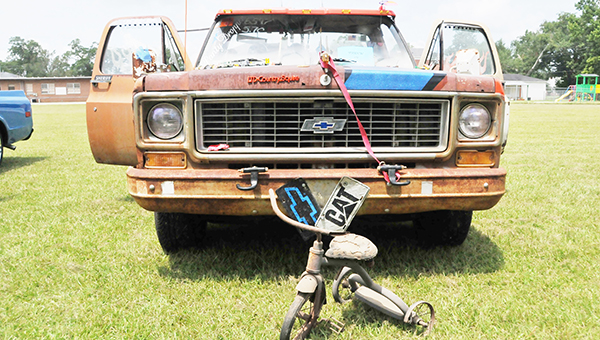 Jerrimie “Rooster” Bryars was quite surprised to hear that his truck won the first ever Atmore Area YMCA Ugly Truck contest on Saturday.

Bryars said his 1974 Chevrolet pick up was bought by a farmer at Lee Motor Co. in Monroeville.

“I tell people that that’s a farm truck,” Bryars said. “That truck was on (Douglas Taylor’s) farm until he passed away 10 years ago.”

Bryars said he got the truck about a year ago.

“One of the grand youngins got it after their granddaddy passed away,” he said. “He told me, ‘I’ll give you this truck if you do something with it.’

“I told him I might made a rat rod out of it,” he said. “That’s pretty much the short version of the story.”

Bryars’ truck has its original 250, straight six engine; is covered in stickers; and the truck bed is lined with old license plates. On the side of the bed, a robotic dog that kicks the side of the truck after getting its head stuck in a bucket.

In the cab, Bryars said he has to drive the truck with its two-stick manual transmission.

“That thing has two sticks,” he said. “One for first and reverse, and one for second and third.”

Bryars said he drives the truck often to Uriah, Atmore, Bay Minette, and will be going to Biloxi, Miss. in October.

Bryars’ friend, Thomas Ardis of Lottie, claimed the second and third place prizes for his trucks, a built-from-the-ground up truck called “Trash Millionaire” and a GMC.