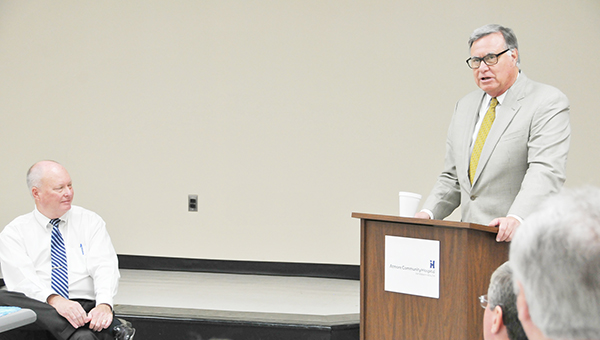 Flowers was the guest speaker at the Atmore Rotary Club’s meeting Tuesday afternoon, and spoke about Wallace and Gov. “Big” Jim Folsom, the inspiration for his new book, “Of Goats and Governors: Six Decades of Colorful Alabama Political Stories.”

“The politicians in our area were our entertainers,” Flowers said. “I wanted to capture the Big Jim and Wallace stories.”

Flowers said the era Folsom and Wallace started to rise in prominence not only in the state, but gained notoriety in the nation, was during a time when Alabama had retail politics.

Flowers said Folsom was an uninhibited man who liked his drink.

On Wallace, Flowers said the former governor had a great memory for names.

“Wallace had the most unbelievable memory,” he said. “He may not have been the best statesman, nobody can say he wasn’t the best governor.”

Flowers said some 20 years after he met Wallace for the first time as a page, he was Wallace’s representative in the legislature.

On the current state of politics, Flowers said Gov. Robert Bentley became governor because of friends and neighbors politics.

To end his speech, Flowers said Folsom’s 1962 race was memorable because of the use of TV in politics.

Back then, the candidates had 30 minutes of air time, and Flowers said he remembers watching Folsom running for his third term.

“To set the state, 1960 was a pivotal presidential election year,” he said. “That’s the year TV became the medium for politics.”

For around 6 minutes of his time on TV, Flowers said Folsom flapped his arms and yelled “coo-coo!” after making an attempt to introduce his family to the state.

Flowers is is Alabama’s leading political columnist. His weekly column appears in over 60 Alabama newspapers.

He served 16 years in the state legislature.