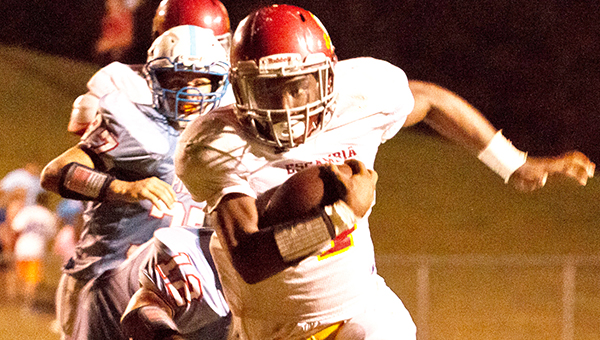 Escambia Academy’s running game propelled the Canoe school to a 52-6 region victory over Pickens Academy last week, and the Cougars are aiming to continue the upswing as they host Jackson Academy on Friday.
EA head football coach Hugh Fountain said after the PA win that the team wanted to go into this week’s contest ahead in the region.
“They’re a top contender in our region,” Fountain said. “We wanted to keep pace with those boys.”
In order to clinch a playoff berth this year, the Cougars need to win the next two region games against JA and Clarke Prep (Oct. 7).
In last week’s win, Cougars running back Kris Brown broke for 139 yards on seven carries and scored three touchdowns, all in the first half. Louie Turner added two touchdowns in the win.
JA has 10 seniors on the team, according the Eagles’ roster on MaxPreps. Notable players include Robert Busy, a junior running back and linebacker; Luke Lankford, a senior quarterback, tight end and defensive end; and Anterius Hicks, a senior wide receiver and cornerback.
Last week, JA beat Clarke Prep, 35-14.