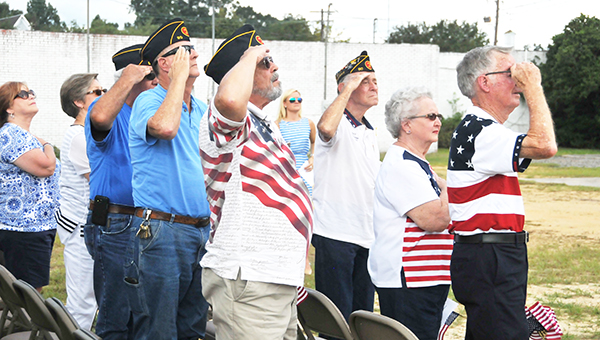 The sun went behind the clouds just long enough for the Billy Glenn Rushing American Legion Post 90 flagpole dedication ceremony on Saturday.
WoodmenLife helped the legion acquire the flagpole, and the city of Atmore installed the pole next to the Main Street building.
Since 2002, WoodmenLife chapters across the country have been dedicating flagpoles and presenting flags, not only to honor the heroes and victims of Sept. 11, but also the men and women of our armed forces serving in combat, WoodmenLife Community Outreach Leader Ashley Pruitt said.
“In addition, these ceremonies pay tribute to the men and women in this community who risk their lives daily to keep us safe — police officers, firefighters and emergency rescue personnel and other first responders,” Pruitt said at the ceremony. “They all deserve our thanks and admiration.”
Pruitt said more than 5,000 flagpoles have been dedicated, and around 30 more will be installed this year.
Pruitt said on the anniversary of the attacks, it’s important to remember where we were and what we were doing on that morning.
“We will probably always remember,” she said. “The events of that day changed our lives forever, making us realize that freedom is a very precious thing, and not to be taken lightly.”
Bo Brantley of WoodmenLife presented the flag, and post members raised the new flag on the pole.
At the base of the pole, there is a commemorative plaque, which reads: In honor and remembrance of the heroes and victims in the fight against terrorism and to celebrate the enduring spirit of all Americans. Presented by members of WoodmenLife.”
The flag flew at half-staff through Sunday in honor of those who died on Sept. 11, 2001.

First responders with Atmore and Poarch’s police and fire departments received a blessing for efforts during a church service at Trinity Episcopal Church on Sun., Sept. 11.
Trinity collaborated with St. Anna’s Episcopal Church of Poarch to offer the service of thanksgiving.
During the sermon, the Rev. Dr. Gary Baldwin recalled the events that occurred on Sept. 11, 2001, notably the planes that hit the World Trade Center towers, the Pentagon in Washington, D.C. and the crash in a field in Pennsylvania.
Baldwin said while that day was dark, there’s light at the end of the tunnel.
“Jesus is our hope,” he said. “He shows us the way through it.”
Patriotic songs were sung and played during the service, including “The Star-Spangled Banner,” “God of Our Fathers” and “God Bless America.”