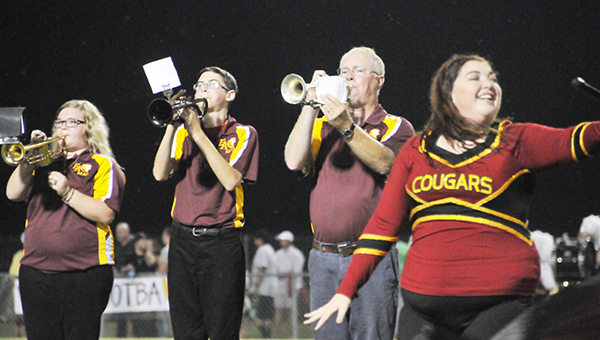 Those who attend Escambia Academy football games may notice something a little different about the Canoe school’s marching band — John Bell on trumpet.

Bell, the band’s new director, marches to the beat and rhythm of the famous “Grease” songs with his students on the gridiron at halftime of the Cougars’ games.

Bell has been teaching parttime at EA since Aug. 1, but was leading the charge when band camp came along in late July.

Bell, of Andalusia, has a bachelor’s degree in music education from the University of Southern Mississippi. He taught school for one year at Georgiana in 2001, but since graduation, he’s been in the ministry as a full time pastor.

“Every now and then I like to take on the responsibility of different small bands,” he said.

Bell said he was a full time minister of music for 20 years, but is now the pastor at Fairmount Baptist Church in Red Level. He received his master’s degree in church music from New Orleans Baptist Theological Seminary.

He said he’s always had a love of music.

“I started out playing the guitar when I was 8,” Bell said. “No one in my family that I know of was in music. I have a twin brother, and both of us went into music.”

He said he is trying to start a beginner band, and that it’s going to take time to grow.

This year, the Cougar band is doing a halftime show based around the popular musical, Grease. The band is performing the songs, “Summer Nights,” “Hand Jive,” Hopelessly Devoted” and We’ll Always Be Together.”

Bell said he will be directing the band through the rest of the school year, and hopes he’ll be hired back next year.

He has been married to Traci for 21 years, and the couple have four children — Caleb, Meredith, Daniel and Kyle.

Absentee voting is ongoing for election