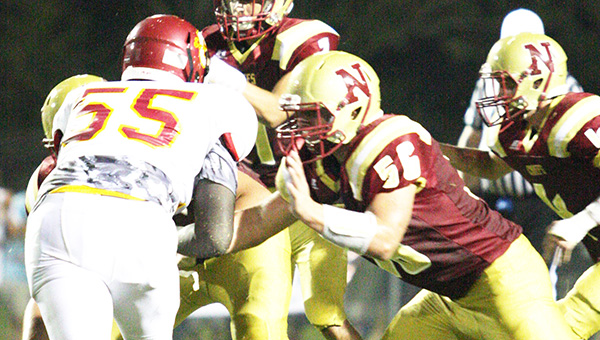 Before the season began, Jared Aliff already made a sacrifice for his team.

The Northview senior, who is home schooled, moved from his chosen position at inside linebacker to defensive end after the spring game.

“That changed everything,” Aliff said. “I was like, ‘OK, this is a lot different.’

So far this season at defensive end, Aliff’s has built a solid resume.

Through five games, Aliff leads the defensive line with 13 tackles, and 5 tackles for a loss. In addition, he leads the team with 2.5 sacks.

When asked if it was difficult to move from linebacker to defensive end, Aliff said he played on the line in middle school.

“I knew a little bit about it,” he said.

Aliff said when he was asked by NHS defensive line coach Logan Weber to make the move the decision was mutual.

Weber said he can’t take all the credit for suggesting Aliff take on the new role, adding that NHS head football coach Derek Marshman had a hand in it as well.

“Jared is a pretty special athlete,” Weber said. “He’s solid as an inside linebacker.

“He has aggression and the ability to fight off blocks. His speed on the edge is really what helps him out there.

“He’s very coachable and great kid,” he said. “He took it in stride. A lot of guys take it as a demotion, but he took it as a promotion, and an honor to handle the responsibility.”

Aliff has been playing football for some 13 years. He began his football journey as a 4 year old.

Through all of the years, Aliff said defense is his favorite part of the sport, adding that he also changed from being a fullback to offensive line on offense, another change.

“That was a big transition,” he said.

Other than football, Aliff plays baseball at NHS.

He said so far, this football season has gone well for the Chiefs.

“I’m very not surprised,”Aliff said about the season. “I think we’re a very good team. We can do whatever we set our minds to.”

The 6-foot-2, 210-pounder said the game came naturally to him in the eighth grade after playing many different positions.

The Alabama Crimson Tide is his favorite college football team, and he said he looks up to J.J. Watt, a defensive end for the Houston Texans.

Aliff is the son of Thomas and Wendy Aliff of McDavid, Fla.