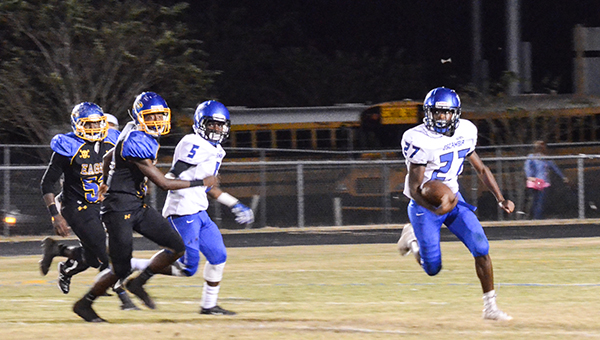 William Bradley reverses field on the Neal defense for a first down. | Corey Williams/The Brewton Standard

EAST BREWTON—The score was dead-even at halftime, but it was the W.S. Neal Eagles who pulled away in the second half to secure a 32-20 win over Class 4A, Region rival Escambia County.

Neal struck in the first quarter when sophomore running back Noah Hill scored on a 4-yard run. The Eagles opted to go for two-points and was successful, taking an 8-0 lead.

As Escambia County struggled to drive downfield on offense, it’s defense picked up the slack. The Blue Devil defense was able to put pressure on Neal quarterback Matt Hutchins forcing a hurried pass at the Eagles goal line. The pass fell right into the hands of Raquan Washington in which the freshman took it four yards for the score. Escambia County failed on the two-point conversion making the score 8-6, Neal.

In the second quarter, on the ensuing drive after a Neal fumble on its own 19, Escambia County quarterback Devon Robinson connected with wide receiver Jeffery Wilson for an 11-yard touchdown. A successful 2-point attempt by the Blue Devils gave the team a 14-8 lead.

At 3:27 to play in the half Neal responded on a 3-yard touchdown by Marvin Maddox. A failed 2-point try made the score even 14-14 going into half time.

The Eagles took the lead late in the third quarter when sophomore defensive lineman Mateo Smith pressured Robinson to get rid of the ball. The ball was unable to make it to the line of scrimmage, and since Robinson was in the end zone on the throw-a-away the play was deemed a safety giving the Eagles a 16-14 lead.

Neal kept its foot on the gas with another touchdown run by Maddox early in the fourth quarter. The Eagles converted on its 2-point attempt to take a 24-14 lead. At 5:50 to go in the fourth the Eagles were able to punch in another score when No. 28 Zachary Baxter cut up the middle for an 8-yard rushing touchdown. Hutchins kept the ball on a quarterback run for the successful 2-point attempt to extend the Eagle lead 32-14.

The Escambia County offense finally found a rhythm late in the fourth quarter as Robinson connected with Justin Johnson for a 14-yard touchdown. Another 2-point try was unsuccessful, making the score 32-20 in favor of Neal. The Eagles played keep away the rest of the way to secure its third win of the season.

Leading the Eagles on offense was Hill with 23 carries for 137 yards and a touchdown.

Neal had 330 total yards of offense for the game. Escambia County had 127 total yards.

“Bottom line, most football games are won in the trenches,” Escambia County head coach Royce Young said. “(WSN) was bigger and stronger than we were up front. We played them hard in the first half. They kind of wore us down in the second half. Football is a game of blocking and tackling. It’s not rocket science. (Neal) was just physically bigger and stronger up front and I think that was the difference.

WSN head coach Doug Hoehn said overall his team played with a lot of effort in the win.

“All (Escambia County’s) points came off our turnovers,” Hoehn said.