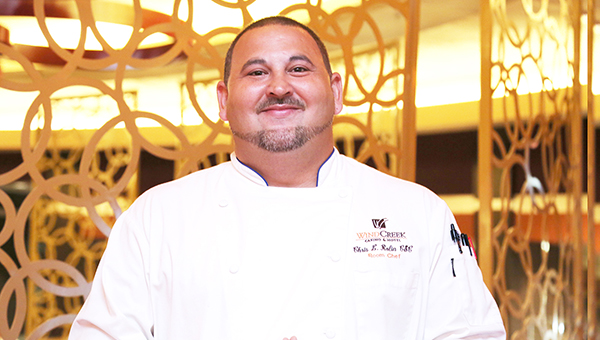 Wind Creek Room Chef Chris Rolin will compete in the World Food Championships next month in Orange Beach. Rolin won the right to the tournament with a ribeye burger. | Submitted photo

The burger impressed judges enough recently at a shift challenge and judging class competition to send Wind Creek Casino Room Chef Chris Rolin to the World Food Championship, which will be held next month in Orange Beach.

“It blew everybody away,” Rolin said about he burger.

Rolin has been cooking at the casino for some 10 years. He said the concept of the burger was something he just created.

“I was just playing with different stuff,” he said. “It just hit me one day. I was thinking about what I could do different, but yet still be really different. I’ve eaten the dry-aged rib eye before. I thought, ‘what if I made it into a burger?’”

Because the burger category filled up fast at the championship, Rolin will be competing in the steak category. He will have to cook three types of steaks — a fillet, a rib eye and a New York strip, all the while using McCormick’s products. McCormick’s is the championship’s sponsor.

There are three different championship rounds during the competition.

Competitors will compete in two opening rounds for a chance to cook in the top 10 round for the title.

“From those two (rounds), they pick the top 10 out of the first two rounds and they’ll go to the final round,” Rolin said. “The winner of each category wins $10,000 and goes on and the top round, where the winner of each compete. They’ll have select judges to pick. Whoever wins the final table wins $100,000.”

Rolin started his cooking career in a little restaurant in Mobile, called the Hickory Pit. He then went on to have cooking stints at the Lakeside Lodge and the Huddle House in Atmore before taking a break.

“I took a break from cooking and started to paint houses,” he said. “I did that for a few years, and I came back and started cooking. My wife and I opened up a restaurant called Pop’s Diner. We did that for a year. Business was slow and it wasn’t there.

“The previous owners ran the reputation in the ground,” he said. “After that is when I came here. It’s been almost 10 years at Wind Creek, and 20 years of cooking.”

Rolin began at Wind Creek as an action cook, and then moved his way up the ladder as a line cook, a senior line cook and to his current role as a room chef.

Rolin, who is the head chef at the Grill Express, said a room chef is one that is like an executive chef in a restaurant.

“If I was working in stand alone restaurant, that’s an executive chef,” he said of his role. “When you’re in a multiple outlet, they call it a room chef, where you have a particular room or restaurant you run.”

Born and raised in Atmore, the tribal member said he loves to cook because he loves food.

Rolin is married to Melanie, and they have three kids, Nate, Tyler and Dakota.