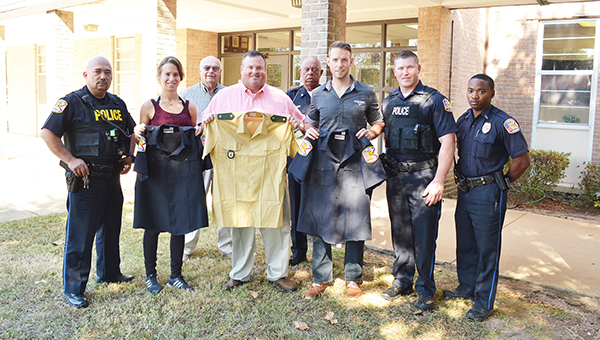 Two police officers from Germany were in town this week to exchange uniforms with the Atmore Police Department as a sign of appreciation. Shown above are Sgts. Janine Meier and Theodor Fischer, along with Chief Chuck Brooks, holding the uniforms with APD patrol officers. | Andrew Garner/Atmore Advance

Two police officers from Germany exchanged uniforms with the Atmore Police Department as a token of appreciation for helping set up an internship with the APD.

Sgts. Janine Meier of Nordrhein-Westfalen, Germany, and Theodor Fischer, of Bavaria, were in Atmore on Monday for the uniform presentation.

Meier has a local tie to Atmore as her grandfather, Marvin Risher, lives here.

“So actually, his wife is the aunt of my dad,” Meier said. “I’ve been here many times when I was a little child and youth. Actually, his home is my home.”

Meier said the reason why Fischer and herself were in town was at the end of her studying at university, she wanted to do a practical, or internship, with the APD.

Former Chief Jason Dean set the internship up, but there were some German government rules that wouldn’t allow Meier to perform her internship with the APD, current Chief Chuck Brooks said.

“They have to do an internship, and she (Meier) wanted to do it here because her grandfather, Mr. Fisher lives in Atmore,” Brooks said. “There were some problems in the government, and they would not allow her to do it.

“She actually did her internship in Munich (with Fischer),” he said. “Jason had it set up where she could do the internship, but it fell through. Because of his efforts, they came over to show their appreciation.”

The uniform that was exchanged is light brown with dark, olive-green shoulder patches.

Meier said she completed her practical in Munich and graduated recently.

“We just wanted to come over and say thank you that I actually was allowed to do this practical work here,” Meier said. “I wanted to show the result of my practical time there. If I would be allowed I would’ve done it here. I had to stay in Europe because of insurance.”

Meier and Fischer got into law enforcement because their fathers were police officers.

“Always,” Meier said about becoming a police officer. “Since I could imagine it. My dad, he has been the same. Both of us, all the time, since we could think about it, wanted to work as police officers.

“Both of us both are saying it’s the best work we can do,” she said. “We can’t imagine doing anything else.”

Fischer said he started his police career in 2008 as a second sergeant in a town called Rosenheim. Now, he’s a first sergeant for a group in Munich that is in charge of responding to anything traffic related.

“After school, I didn’t want to study and make no money, so I wanted to work with people,” Fischer said. “Every day, we never do the same thing. Every time we deal with other people, we have to deal with other situations. It’s always something new.

When asked whether the crime is similar in Germany as it is in America, Meier said it’s about the same in regard to traffic accidents, drugs and domestic violence, to name a few.

While in Atmore, Meier and Fischer rode around with Brooks during a shift Monday night.

Brooks said both had a lot of questions.

“It was pretty neat to have two police officers from Germany here,” he said. “They rode with me (Monday night) for a while. We went on a few calls. Policing is the same all over the world. They respond to the same calls and complaints.

“It was real neat to let them ride,” he said. “They were really appreciative and nice and friendly.”