Going to the ‘ship 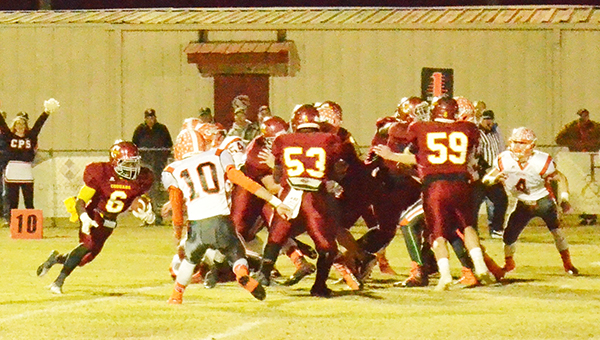 Escambia Academy’s Kris Brown (4) rushes for a 4-yard touchdown in the first quarter tonight. The Cougars advance to play Autauga Academy in the AISA Class 2A state championship next Friday afternoon in Troy. | Andrew Garner/Atmore Advance

Escambia Academy will be playing for the AISA Class 2A state championship next week after defeating Clarke Prep 54-24 tonight in a semifinal game at Bachelor Field.

During the win over CPA, EA showed its defensive dominance early.

The Gators lost two fumbles, which were returned for EA touchdowns and were held scoreless in the first half.

“We played good ball tonight,” Fountain said. “The second half was pretty sloppy. We took out all of the starters so nobody could get hurt and show up as full speed as we can next week.

“I was pretty proud of them in the first half, and the first two or three plays in the second half, we played great,” he said.

Fountain said it’s always tough to play a team that traditionally runs a Wing-T offense, and reminded his players not to take the Gators lightly in the second half.

“We knew it was going to be a huge and important game for us, and we took care of business,” he said. “Now, we have our next opportunity.”
EA senior running back Kris Brown got things going on a 4-yard touchdown run with 9:35 left in the first quarter. Brown’s run was set up on a nice 23-yard fourth-down conversion by Patrick McGhee on the drive.

Later in the first, EA senior quarterback Kainoa Gumapac added a 14-yard touchdown rush, and with the PAT, the Cougars led 14-0 after the second fumble.

McGhee converted on a 12-yard rush early in the second quarter, and Gumapac connected with Fred Flavors on touchdown passes of 20 and 45 yards to go up big, 35-0 with 1:15 left in the first half.

With the defense playing lights out still, EA linebacker JoJo Carpenter penetrated the Gator line and picked up a fumble for a 20-yard TD with 22.3 seconds left in the half.

After the break, the Cougars didn’t let off the gas as Brown ran back a kickoff return for a TD for 81 yards, and McGhee found pay dirt on a 67-yard rush in the third quarter.

The Gators weren’t going away quietly as the Grove Hill team dished out two touchdowns each in the third and fourth quarters.

Northview fell behind early and gave up a couple big plays as Graceville, Fla. ended the Chiefs’ season with a... read more