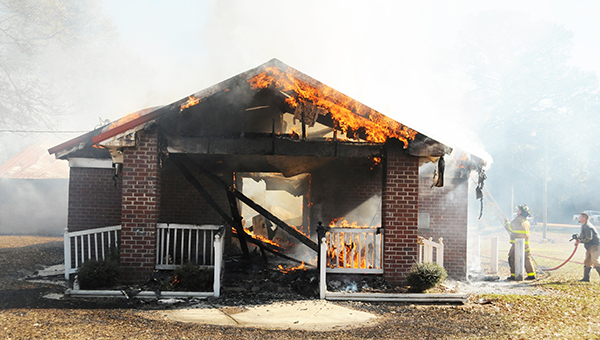 Cause, origin under investigation

Investigators worked through the weekend and into this week to determine the cause of a structure fire that claimed the First Baptist Church in McCullough on Dec. 16, according to officials.

Michael Knight, special agent and public information officer with the Bureau of Alcohol, Tobacco, Firearms and Explosives, said that ATF certified fire investigators worked with the state fire marshals office as well as the police and fire departments to determine the origin and cause of the fire.

Knight said as of Dec. 19, the cause and origin hasn’t been determined.

The fire’s origin was in the attic, McCullough Fire Chief Eddie Kirby said.

“It spread to the rest of the church,” Kirby said.

Kirby said the firefighters knocked the back doors out, the south door out and the east doors to get into the fire.

Kirby said the fire department was called to the scene at 8:05 a.m., and it took 3-and-a-half hours to battle the blaze.

Kirby said the church was a total loss.

Fire departments from MCullough, Poarch and Huxford responded to the scene.