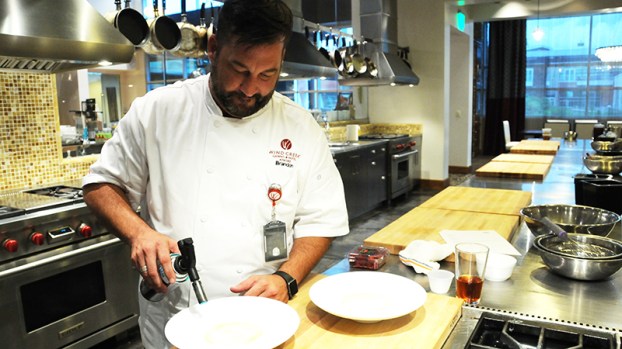 Chef Brandon Thrash works on a dessert in the Kitchen at Wind Creek. | Andrew Garner/Atmore ADvance

Arkansas native Brandon Thrash is the new specialty chef for the Kitchen at Wind Creek Casino and Hotel in Atmore.

Thrash began working at the hotel in March. He manages and leads cooking demonstrations for large groups as well as personal, hands-on culinary studio classes.

Thrash made his way to Atmore from southwest Arkansas. He went to culinary school at Sullivan University in Louisville, Ky., where he earned his associate’s degree in applied science.

“After I graduated there, I moved to Tulsa (Oklahoma), just about a couple months after graduation, and ran a four-diamond restaurant (Polo Grill),” Thrash said.

Thrash ran the Polo Grill for four-and-a-half years, and then started to cook for a regular cooking segment on a nationally syndicated TV show, Make Your Day Count. He was then recruited by Oklahoma State University to teach.

Thrash taught at the collegiate level for 15 years, and served as the director of culinary arts for Texarkana Community College. Additionally, Thrash has also had the honor of cooking in the prestigious James Beard House in New York.

Thrash said his earliest memory of cooking was for his mother’s birthday.

“I was going to make a cake,” he said. “The only cake mix she had in the pantry was for a strawberry cake, which sounded terrible, but it was all we had.

“I mixed everything up, threw it in the pan and put it in the oven,” he said. “Then, I looked at the back of the box to make sure I did everything right, and I said, ‘Oh, eggs.’ So, I took it out of the oven, scraped it out, and put the eggs in.”

Thrash said from there, he’d switch with his mom on cooking duties at the house.

Thrash said he knew when he graduated high school that he wanted to be a teacher.

“I went to college as a math major, and I wanted to be a math teacher,” he said. “Teaching has always been a passion of mine. On my portfolio in college, on my five to 10-year plan, one of them was that I wanted to be a culinary school teacher.”

One of Thrash’s duties as specialty chef is creating menus.

Thrash said his approach to menus is two-fold.

“When I write the menus, I try to split it up equally in good dishes that are easy to replicate at home, and easy to do at home,” he said. “The other philosophy is that I like to develop a dish they’re not likely to make at home. It’s a bit more exotic. They may not be able to find the protein, but they can say, ‘You know what I ate the other day? Rabbit.’”

Thrash said he loves cooking because of the science behind food.

“That’s what I want to bring to our guests here, not here’s what we do so that we can replicate it at home, but here’s the why of what we’re doing so that they understand the importance of it,” he said.