An Atmore woman was arrested and charged with theft of property from a local real estate company, according to police officials. 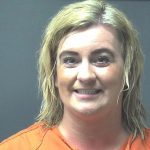 Police Chief Chuck Brooks said that Jamie LeAnne McCoy of Atmore, was arrested and charged with theft of property I, on Thurs., June 1.

“The arrest came after a complaint was filed to the Atmore Police Department by a local real estate company,” Brooks said.

Brooks said the complaint was filed after the owner of the business found numerous discrepancies in the business’s financial records.

Brook said McCoy has been charged with theft of property I because the charge is defined as property which exceeds $2,500 in value.

McCoy was transported to the Escambia County Detention Center in Brewton.

An Atmore has been arrested on home invasion, burglary and robbery charges, according to the ECSO. Chief Deputy Mike Lambert... read more