An Atmore man has been charged with two counts of attempted murder for allegedly throwing a pregnant woman into the Perdido Creek, according to the Escambia County Sheriff’s Office. 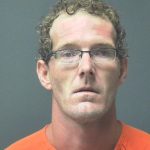 Chief Deputy said Daniel Ray Raybon, 30, of 167 Nathan Rd., Atmore, is charged with two counts of attempted murder with a bond set at $250,000. Additionally, Raybon was also charged on July 17 with possession of marijuana I, criminal mischief I and violation of probation. Bond for the additional charges was set Tuesday.

Lambert said on July 7, a passerby came across the bridge on Railroad Street at Perdido Creek and witnessed an injured pregnant female and male exiting a truck at the creek.

Lambert said deputies investigated the allegations and made an arrest on the suspect and charged him.

UPDATE: All driver license services have been restored statewide after a computer problem was discovered earlier today. The Alabama Law Enforcement... read more