A Brewton man has been arrested on child pornography charges, according to the Escambia County Sheriff’s Office. 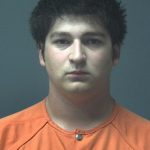 Chief Deputy Mike Lambert said on Aug. 10, the ECSO received a complaint in reference to what parents felt to be inappropriate contact with their minor child of a sexual nature.

The ECSO, the Department of Human Resources and the Child Advocacy Center opened an investigation into the matter, Lambert said in a release.

“As a result of the investigation, warrants were issued for the arrest of David “Noah” Purdue,” Lambert said.

Purdue, 19, surrendered himself to the ECSO on Oct. 18, and was charged with five counts of possession of child pornography and attempting to possess obscene material. Lambert said the victim was under the age of 18. According to reports, Purdue was a volunteer firefighter with the Barnett Crossroads Volunteer Fire Department.

The case is still under investigation.