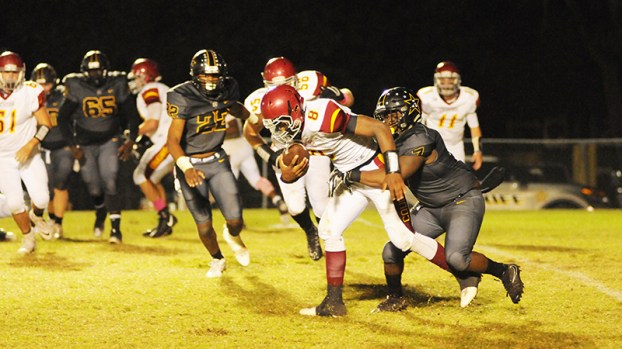 Escambia Academy came up with a big win over Bessemer Academy tonight, winnin 34-28 on the road.

This was the first time the fourth-ranked Cougars beat the Rebels at Norton Field in the city just north of Birmingham. The last time EA beat BA was in the 2014 state championship game.

Fountain said the boys did a good job in the second and third quarters. The Cougars led 34-14 going into the fourth.

He said the offense had control of the ball game, and noted a 6-7 minute drive in the game for a two-touchdown advantage.

Additionally, Fountain said a double-pass right before halftime from Jabe Dawe to Jace Daniels and then to Patrick McGhee for a score was essential in the win.

“That gave us momentum and confidence,” he said.

The Rebels utilized their onside kick game after seeing themselves trailing by 20 in the fourth quarter, Fountain said.

BA scored to make it 34-21, and then recovered an onside kick. EA traded a possession and the Rebels cut it to the final score with about 3 minutes left, Fountain said, adding it got a little hairy there at the end.

In the end, the Cougars recovered an onside kick and rode it out, the coach said.

Fred Flavors led EA with 136 yards on 13 carries and two scores. He also had two receptions for 34 yards.

Fountain said he was pleased with how the boys responded after falling 42-20 to top-ranked Autauga Academy last week.

“That was a big win for us going into the playoffs,” he said. “We knew finishing up the regular season that we were playing two top AISA teams.

“This gets us physically ready,” he added. “I was proud of the way they responded. We’re going to the playoffs on a good streak. Winning nine regular-season games is something you don’t do every day.”

Next week, the Cougars host Cornerstone Christian in the first round of the AISA Class 2A playoffs. EA will also hold its senior night during the game.

ECHS out of playoff hunt with loss W.S. Neal’s game plan tamed Escambia County as the Eagles went on to... read more