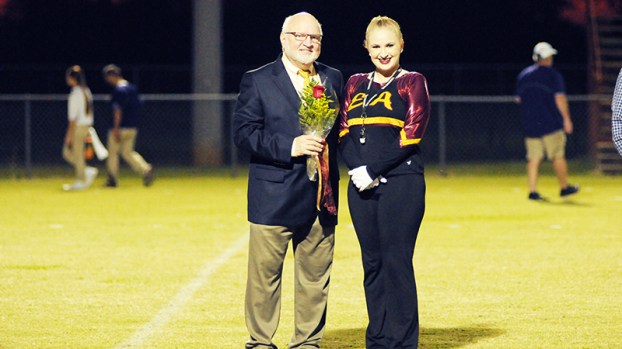 The senior has been at EA since the seventh grade. She moved to Atmore from Fort Payne, and was already experienced in band before arriving.

Harris, smiling whenever she talked about her love of music, loves playing the trumpet, her chosen instrument.

“I love music, I love writing music,” she said. “I love listening to music. One of my study methods is to make the material into a song.

“If I’m thinking of something in science, I’ll make up a rhyme and put it into a beat so it’ll make me remember it easier,” she said.

Harris said she was chosen as the drum major as a freshman. Since, she’s had to try out for the position two out of the last three years.

“My band director at the time (freshman year), Mr. Tony Edwards, he came up to me in my freshman year and asked me if I would like to direct,” she said. “I went home and asked my dad (Dr. William Harris) about it. My dad was the drum major all throughout high school, and so my dad was like, ‘you’re doing this.’”

There’s a lot that goes with being a drum major.

Harris said the hardest part of being a drum major is knowing the music inside and out.

Even if it is hard, Harris said she has fun every time she steps onto the podium on Friday nights. Last week was her last time serving as the drum major during a home football game.

“It’s fun,” she said. “I enjoy it. There are a lot of technical battles that go into it. It’s not just a job. It’s fun. It’s very time consuming. It is a job, but it is a job that I really like.”

Throughout her time in band, Harris has won numerous awards, including two Dekalb County symphonic band awards; was selected to the AISA All-Star band five times; and made the ACSA All-Star band twice.

Harris said the reason why she loves music so much is because it can affect your mood.

“I like the way you can go from happy and hoppy from listening to pop music, and then you could go listening to rae gae and get groovy with it,” she said. “You could listen to Christian music, and you can get some religion. I like that you can gave fun doing everything with music. Nothing is fun. You can’t have a really good time without having music there.”

Upon graduation, Harris plans on going to EMT school in the summer, then to Coastal Alabama Community College and major in biology. She then plans on attending the University of South Alabama to enter into the pre-med program, where she’ll focus on trauma surgery.