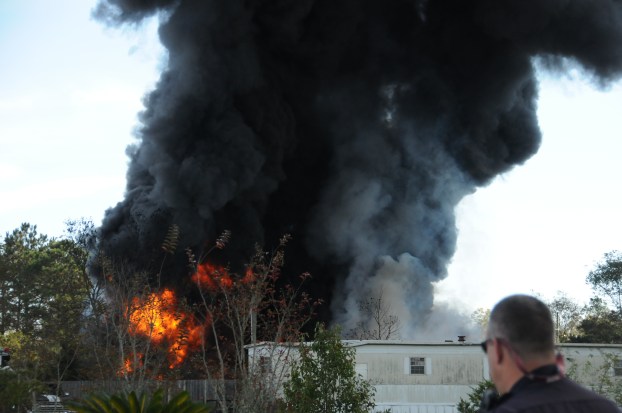 Firefighters battled a brush and tire fire this afternoon behind a resident on Power Road just off of Robinsonville Road.

When asked what happened, Peebles said the fire is still under investigation.

“I know they were cleaning their land back there,” he said. “It was behind 69 Power Rd. — the actual physical address to the property.”
Peebles said some people were cleaning up thee area.

“I don’t know where they might have created the spark,” he said. “The people there on 69 Power Rd. said there was nobody out there today, but somebody was out there yesterday. Maybe they created a spark and it smoldered. I don’t think anybody intentionally set it on fire. That would be hard to prove.”

As a result of the brush fire, a pile of tires 50-by-50 feet in size caught fire, causing a black plume of smoke to rise up in the air. The trail of smoke could be seen from downtown Atmore and as far as the interstate.

Peebles said a car burned up as a result of the tire fire, and firefighters managed to save a house trailer on the property.

“The fire was within 15 feet of being on the house trailer,” he said.

Peebles said some firefighters fought the blaze with both an offensive attack (directly on the fire) and a defensive attack (to protect the trailer).

“They were keeping a boundary there, and keeping water on the trailer to keep it cool,” he said. “If it gets too hot, it will combust.”

Before the fire got out of hand, Peebles was on scene with Firefighter AJ Beachy trying to douse the brush fire and keep it from spreading south of the property.

Peebles said it took 15,000 gallons of water to extinguish the fire.

“If it wasn’t going out pretty soon there, we were going to start putting foam on it,” he said. “We got it down to where water took care of it.”