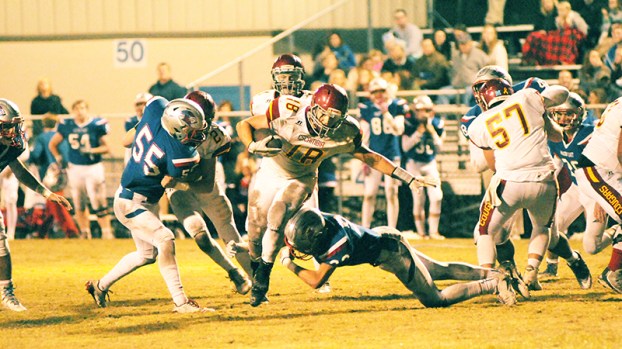 Escambia Academy, Autauga to meet in 2A title game

Escambia Academy and Autauga Academy will duel once again for all the marbles on Friday for the AISA Class 2A state championship in Troy at Veterans Memorial Stadium.

This will be the fourth matchup for both teams in the last two years. Last season, the Generals (12-0) came out on top 28-21 in a close game to claim the title.

For the fourth-ranked Cougars (11-1), getting back to the state championship — now two years in a row and the third time in the last four years — has been a goal from the start of the season, EA head football coach Hugh Fountain said.

Fountain said there’s nothing like having to test your will power against a top opponent.

“We are fortunate to come out on top the last time we played (a 42-20 victory on Oct. 20),” Carr said. “Like I told our kids, it’s hard to beat a good team, and it’s even harder to beat a good team twice. We have a lot of respect for them. I’m sure it’s going to be quite a game for everyone to see.”

During the 42-20 loss, EA played against a massive offensive line, as it will do so again on Friday.

Fountain said during the regular-season loss, the effort just wasn’t there.

Being that this is the fourth time both will play each other, game plans aren’t going to change much, both coaches said.

“We’re not going to do anything different,” Carr said. “I’ve been at fault in the past preparing too much. I thought I put too much on my son (last year) as a tenth grader. I just think you go with what ‘s gotten you there.”

Carr was referring to his son, Tripp Carr, a junior, and starting quarterback.

Carr said the big keys for the Generals include playing sound on all three phases of the game.

“We want to win the turnover battle,” he said. “The keys are like they are in any big game. We’ve got to avoid the big play.”

When it comes down to it, the winner will be determined by how much will power it conjures, Fountain said.

“This is a game that determines what kind of will power do we all have to not be denied,” Fountain said. “Trust me, when you get down to it, if you lose a game like this, it’s going to come down to some guy not having will power. You’re either going to win it or lose it.

“You can’t have anything if you don’t have will power,” he said.