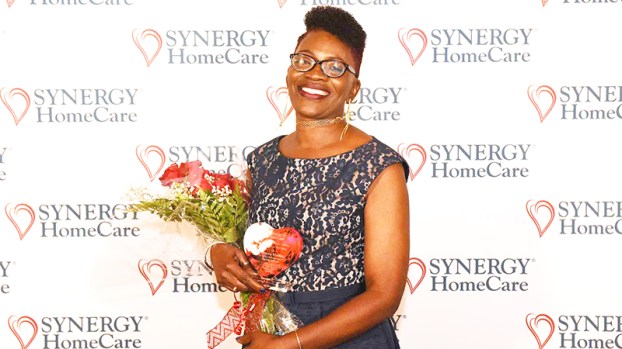 Johnna Hazley loves one on one time.

Hazley used her love as a home healthcare caregiver and was selected out of 4,000 caregivers in the Synergy HomeCare system in the United States as the 2017 National Caregiver of the Year.

Hazley, of Freemanville, works as a home healthcare giver with Synergy HomeCare out of Daphne.

She said she couldn’t have won the award without God.

“It’s all God,” she said. “I couldn’t have done without the gift of love, and credit for that all goes to God.”

Andy Luedecke, co-owner of Synergy, said Hazley was nominated because she’s won so many of the company’s awards.

Luedecke said the Caregiver of the Year award is the No. 1 award in the system.

“We’re very proud of Johnna,” he said. “We’re very honored to have her working with us. She’s an inspiration to everyone coming in contact with her.”

Hazley received her CAN, or caregiver license, around 1991-92. She started going to school for nursing, and found out her daughter, then had a tumor. She said she had to let the nursing goal go, and got her CAN license instead.

“I’ve helped a lot of people, my grandparents, my mom and dad,” she said. “Just recently, I left my mom two years ago.”

Hazley said she received her training by working at Atmore Nursing Center.

Her training consisted of learning new skills, including changing patients, moving them from the bed to a wheelchair, feeding the patients and showing some TLC, among others.

She said she loves her job because she has the opportunity to give love back to the patient.

“A lot of people don’t have anybody,” Hazley said. “If they still have the ability to stay at home, why not get someone to come and take care of them. I give them a lot of love and need.”

When asked what the hardest part of her job is, Hazley said it’s when you lose a patient, adding that when one passes away, it’s like a part of you goes away, too.

“That’s the hardest part, other than that, I love that I take my job very seriously,” she said.

Luedecke sad Hazley’s so good at her job that there’s always a reoccurring problem from patients.

“Every single time we have her fill in every home, we’ve got an issue to deal with because they call and ask if she’s full time,” he said. “Every time another family needs help, they gravitate toward her.”

EA wins second state championship in 4 years TROY — The party bus is on its way back to Canoe.... read more