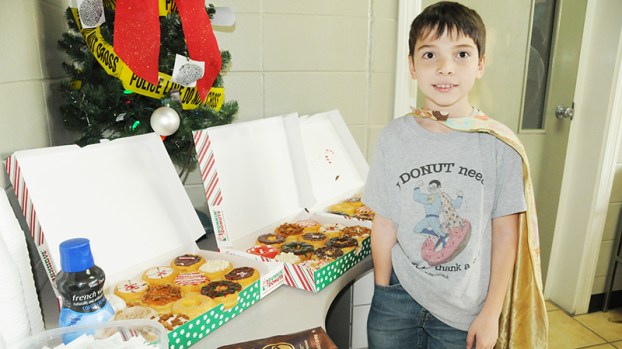 Donut Boy says ‘thanks’ to APD

The Donut Boy was at it again — this time at the Atmore Police Department.

Tyler Carach, a resident of Bratt, Fla., and who has traveled to more than 28 states saying thank you to police officers with donuts, extended his gratitude to the APD for its efforts to protect the city during a shift change on Dec. 21.

As each police officer came in for the shift, Carach was waiting to hand them a goody bag, along with donuts and coffee, which were donated by Dunkin’ Donuts.

“We just want to thank them because they are risking their lives every day saving strangers,” Carach said.

Because of his wide spread popularity, Carach has visited several police stations across the country, including the New York City Police Department, where he spent the day in the commissioner’s office. In fact, in the last 16 months, Carach has delivered more than 50,000 donuts to police officers. The APD stop put Carach over the 50,000 mark.

“This program isn’t for him at all, but I’ve seen him as a parent grow and seen him as a person,” Carach’s mom, Sheena said. “He wants to one day be a police officer. There are so many rewards to it.”

One of the biggest rewards that Sheena said she’s seen is that grown men and women will come up to her and tell them that her son’s donation helped make their day better and to remind them why they do what they do every day.

APD Sgt. Ryan James said Carach’s donation is a great thing, and that all law enforcement needs more of it.

Sheena said since they’ve been back, she’s been working on the schedule for donations for next year.

“We wanted to do something for Christmas,” she said. “We’ve haven’t been (to the APD, yet). We live like 5 miles from here.

“We know some of the officers here, and just decided to go to Atmore,” she said.

Carach isn’t the only one in the family who has a heart for others. His sister, Naudia, runs two non-profits and is a freshman at Northview High School.

When asked whether she knew this effort would be at this point, Cheena said she didn’t know.

“Honestly, I know how kids are,” she said. “I’m a mom. I kind of thought when he said that he wants to take a donut to every cop in America; I thought it would be a phase.

“The more he does it, the more he wants to do it,” she said. “When we get home from a trip, he always asks, ‘when are we doing it again?’”

Gleaning radishes. That’s what a group of employees from United Bank and Empowerment Tabernacle Christian Center were partaking in on... read more