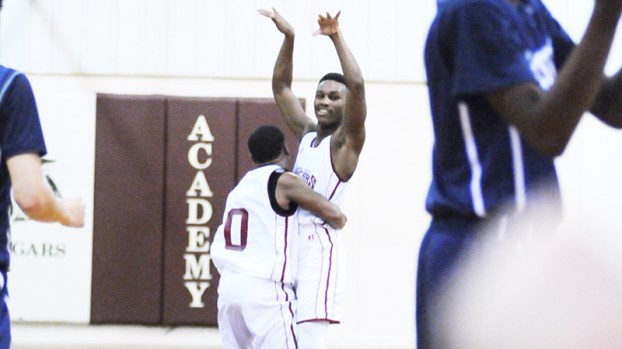 Flavors’ game winning shot right before the buzzer came after a timeout WHS up 79-77 with 6.3 seconds left in the game.

EA boys basketball coach James Lee said the game plan was for the boys to win the game with one shot off of a double screen.

However, a player went the wrong direction and caused the plan to go awry.

“We were going for the win off of the double screen,” Lee said. “The play broke down, and Fred used it and took chance. It just so happens that’s his second buzzer beater in high school.”

The final horn marked the end of a thrilling game between two evenly matched schools.

WHS is a Class 4A school in Florida, and EA is in AISA Class 2A. Both teams went back and forth with each other at times, and fought back from deficits.

Lee said he was proud of the guys for fighting back and ending the game on a good run.

“I’ve got to give my team props,” he said. “They hung in there against a really good team. They fought through what I thought was a lot of adversity. You can’t say enough about the play they had tonight. I’m very proud of them.”

A lot happened in the last 2 minutes of play.

A short time later, Flavors was at the line for a pair and missed both. On the second miss, Louie Turner got the rebound and put back to cut the game to two.

Walton’s Kentrell Parker dished in a pair from the foul line, and Turner made a pair to give the game a 76-74 look.