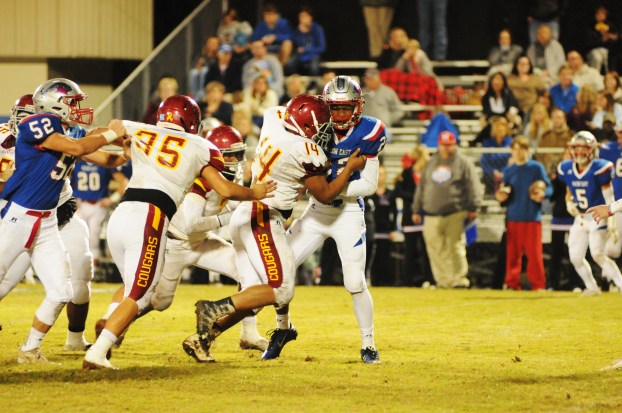 Escambia Academy’s Fred Flavors is The Atmore Advance’s 2017 Defensive Player of the year.

Every game during the Cougars’ state championship run, Flavors said he just did what he had to do.

“I really wanted to go and get things accomplished,” he said. “I wanted to set myself up to do good every game.”

Flavors added that he would do anything for his teammates.

On the award, he said he thanks God for blessing him with the opportunity to play the game of football.

“It’s an honor to be named offensive player of the year throughout all of the talented athletes around our area,” Turner said. “I just want to thank all of my supportive family that are always at the games screaming and cheering us, and also to our loyal great fans.”

Turner said his running backs coach Marty Long pushed him extra hard on and off the field.

“He’s helped me improve my game, and I appreciate him for that,” he said.

“It was a great year for Escambia Academy football,” Fountain said. “When an AISA school defeats three schools that play in the public school associations (Northview, Jay and Resurrection Catholic), that’s something to be proud of.

“When we defeated First Baptist, who won the Independent Championship in South Carolina; when we defeated and broke Autauga Academy’s 25-game streak and Coach Bobby Carr’s nation-leading 87-win streak, it says a lot about our players and staff.”

Fountain added that all of the credit goes to the entire team and family, including parents, supporters and fans.

Flavors is ASWA Back of Year finalist

Escambia Academy’s Fred Flavors is a finalist for the Alabama Sports Writers Association’s AISA Back of the Year. Flavors is... read more