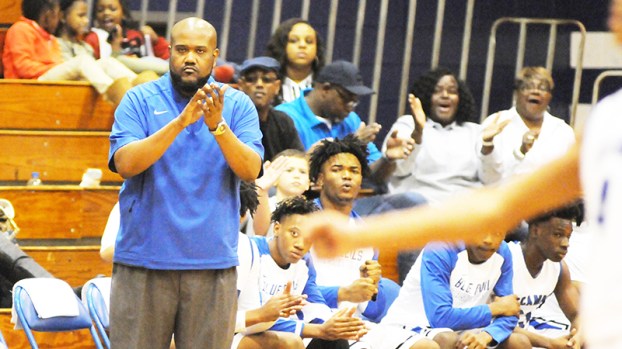 Without God and family, Escambia County boys basketball coach Rodney Jackson wouldn’t be where he is today.

Jackson, who has coached the boys team all season long, suffered a stroke on Aug. 6, 2017.

“I didn’t talk at all in the first month,” Jackson recalled.

Jackson said the road to getting back to a normal lifestyle was hard, but he had help.

The first month, he said, consisted of him going through therapy and walking.

“My family was important (during that time),” he said. “They got me through that. My family and God.”

“They texted me and said, ‘Coach, you’re coming back,’” he said. “That inspired me.”

From that little inspiration, Jackson said he got the strength to move forward.

Once he returned home from the hospital, Jackson said he started walking, doing pushups and situps.

Because his speech was limited, Jackson said his first word after the stroke came in the form of his brother, Rico’s (head football coach) dog.

“I came down in the living room, and my daddy was sitting with the dog and he was looking at me and I said ‘Jack!’” he said. “My daddy (Richard) said, ‘What?!’”

From there, Jackson began to work on his speech and has progressed well.

Jackson said his inner circle, which included family and friends, really helped him get through this set back.

“I couldn’t have done it without them,” he said.