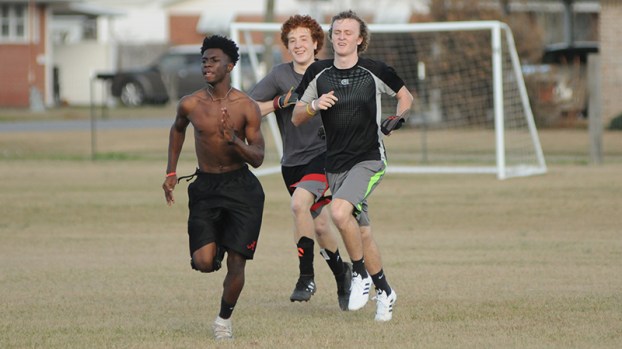 Kick it in gear

Escambia Academy will be hitting the pitch this spring as the school begins play for its first soccer program.

“We contacted the parents and let them know that it’s an idea, and we went from there,” Bono said. “We had kids signing up, and we then started looking into equipment.”

From there, Bono said the soccer program’s start up took off on its own.

He said those who were interested in the program started pushing for it in early January.

“We started the process in December, and really started pushing for it,” he said.

Bono said games this year will be non-official exhibition-like road contests. He said the plan is to join the AISA next season.

For their first season, the Cougars had to raise money for equipment and goals. At present, EA is practicing at the Atmore Area YMCA soccer fields.

Bono said the YMCA was gracious enough to allow them to use the field in exchange for some yard work help.

Bono said the school is in the process of working together a schedule for this season.

On the team, the coach said there is a good mixture of players based on level of experience.