The mother of the teenager who allegedly shot another teenager inside of a residence on East 4th Street has been charged with attempted murder, Atmore Police Chief Chuck Brooks said Wednesday.

Brooks said Yashetta McKenzie, 36, of Atmore, has been charged with attempted murder. He said the reason McKenzie was charged is because of her participation in the criminal act where the victim was shot.
“Therefore, she was an active participant of the crime,” he said.

Brooks said in a press release last week that the APD arrested an Atmore teenager for the shooting. 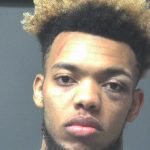 Brooks identified the shooter as DeAndre Mitchell, 17, of Atmore. Mitchell was a senior at Escambia County High School.

Brooks said in the press release that officers responded to Atmore Community Hospital in regard to a gunshot victim being treated in the emergency room on Feb. 27.

Brooks said when officers arrived, emergency personnel reported that the victim, a 17-year-old juvenile male, had injuries that were life threatening.

“Attending physicians stated that the victim suffered a punctured lung, and the bullet also struck his spine, leaving the victim paralyzed,” he said in the release. “The victim was conscious and was able to identify the person who shot him.”

Brooks said Mitchell allegedly pulled into the yard, got out of a vehicle and started shooting at the residence on East 4th Street.

“It’s my understanding that an altercation between Mitchell and another juvenile occurred at the school,” the chief said when asked about what led up to the shooting. “The victim who got shot was a bystander at the house.”

As for the active participation role on McKenzie’s part, Brooks said she’s being charged with attempted murder because she didn’t do anything to stop the criminal act.

In the Wed., March 7, 2018, edition of The Atmore Advance, we published an articled called “Airport grand opening is... read more