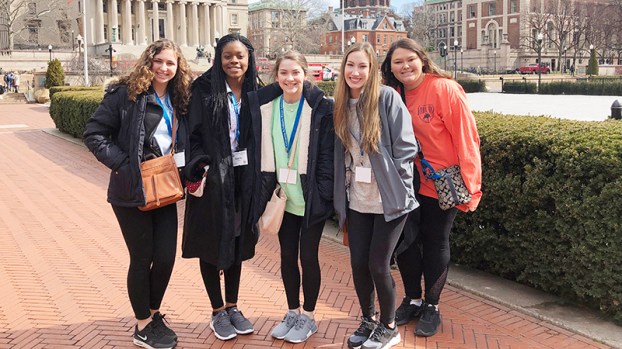 The beat will continue to go on as members of Northview’s Tribal Spirit yearbook staff recently went to a conference in New York City to help sharpen their skills in scholastic journalism.

Robinson said the students were able to chose some 13 classes out of hundreds to attend.

Robinson said the staff went to the conference for three days, and learned a bunch.

“The first time we took a group was seven years ago,” she said. “Our book (then) was OK. The Columbia Scholastic Press Association is considered the best as far as scholastic journalism. Going to Columbia is an experience itself. IT’s absolutely beautiful.”

Robinson said the trip is advantageous to the students because it gives them a different point of view.

“We saw examples of the very best books in the country,” she said. “Not last year, but the two years before that, we won gold medals through CSPA. We were really proud of that, and I think that this year, we received honorable mention. That, in itself, says a lot about what the conference has done for us.”

One of the benefits of going to the conference is that the students take what they learn, bring it back to NHS and then pass it on to future yearbook staffers, Robinson said.

Of course a trip to NYC wouldn’t be complete without some sight seeing. The yearbook staff visited popular attractions, including the 9/11 Memorial and Museum; the Top of the Rock, which is highest point of New York City at Rockefeller Center; saw Broadway show “School of Rock,” the musical; walked the High Line; visited the Cathedral of St. John the Divine, the oldest and largest cathedral in country; walked across the Brooklyn Bridge; shopped; went to Central Park; and walked down Fifth Avenue, to name a few.

To pay for the trip, the yearbook staff held fundraisers throughout the year, and students had to cover the cost of the trip that the fundraisers didn’t cover.