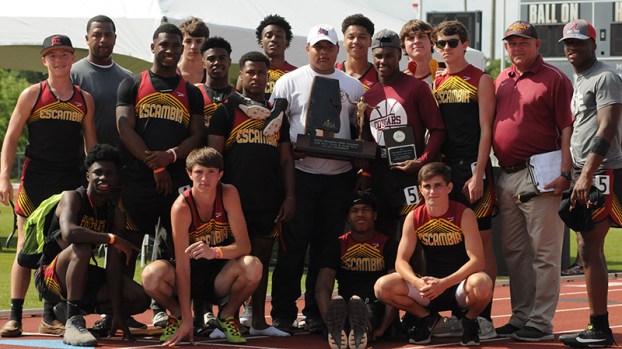 The Cougars were taking it all in after winning their fourth straight overall AISA track and field championship on April 13.

EA’s Fred Flavors, a senior, was named the most valuable player for his performance at the meet, along with Tuscaloosa Academy’s Kalin Burt on the girls’ side.

Flavors, who had to compete for an injured Patrick McGhee, said it was tough, but he managed well.

“I had to step in and do my best. It wasn’t easy, but I managed to tough it out,” he said.

EA track and field coach Hugh Fountain said he was pretty satisfied with the whole team’s performance, and that it took a lot of hard work to get to this point — winning four straight championships.

“It takes a lot of determination and liking what we ask for in track,” he said. “We have had a great senior year, winning the football state championship, finishing runner up in basketball, and winning the weightlifting and track titles.”

Each year, Fountain said he uses the boys’ performances at meets and compares them with other public schools.

EA’s top five finishes in events are listed below by event: