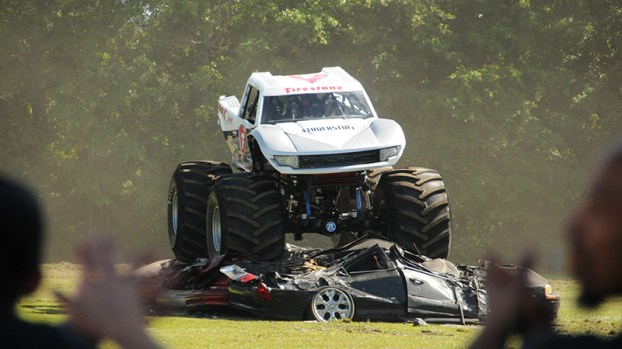 Jumping over a Boeing 727 from wing to wing doesn’t take any time at all, Bigfoot Driver Dan Runte said recently.

Runte and Bigfoot 4×4 Inc. were in town at Johnson Ford on April 20-21, crushing a few cars, posing for pictures and signing autographs as a part of the tour that brings the popular truck around the country.

Runte began working for Bigfoot some 29 years ago as a mechanic. He’s been driving for the last 27 years.

“I had no intention of driving,” he said. “I ended up in the seat, and I never got out.”

Runte said the adrenaline rush one gets as the driver, and seeing the excitement in the fans faces are what keep him doing this job. He said he’s fortunate to have this job because it takes him all over the country and world.

Bryan Bertoletti, a fabricator for Bigfoot, said they’ve traveled everywhere, from all 50 states, to the United Arab Emirates, Germany, Kuwait and other places.

Bertoletti said the Bigfoot that was at Johnson Ford runs on a blown and injected Ford 572 engine on 66-inche wheels. The engine runs on methanol, and only lasts about 6 minutes every time it crushes a car because it’ll tire out, he said.

As far as jumping long distances, Runte said the highlight for him came during the Boeing 727 jump in 1999.

He still holds the world record for his jump at 214 feet, 8 inches.

Some four years later, Bigfoot jumped over the 18-wheeler that carries the famous truck, Runte added.

“The jump happens a lot faster than you think,” he said.