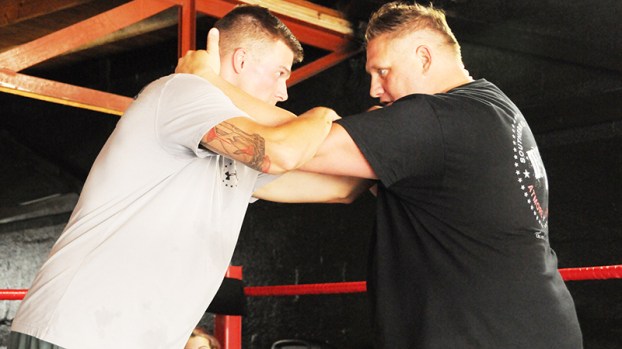 The sound of flesh hitting the square-circled ring inside of Dirty 30 Southern Heat Wrestling Training Center on Ridgeley Street rang true as its first students took their first bumps during a tryout on Saturday morning.

“It hurts worst than you think,” Student Logan Murphy said.

Murphy, of Monroeville and a patrol officer with the Atmore Police Department, said he grew up watching pro wrestling and played with his friends on a trampoline in his backyard.

“The house kind of got trashed a lot,” he quipped.

Murphy said he saw that the training center was holding tryouts via Facebook, and decided that he’d come out and give it a shot.

“I watched WCW Monday Nitro every Monday night as a kid,” he said.

Justin Walden, a rising senior at Pleasant Home, is also a student at the sportatorium. Walden’s father, Kenny, said they’ll be traveling to Atmore every week from the Hopewell Community for training sessions.

“This has been a childhood dream of mine,” Justin said. “I grew up watching wrestling.”

Justin also plays on the PHS football team and is a state weightlifting champion.

He said he wants to make it as far as he can in the business.

Justin will be training every Tuesday and Thursday night for the 11 weeks.

The new wrestling sportatorium will feature a training facility for those interested in the business of pro wrestling, a women’s defense class, a low-impact, high energy dance class and wrestling shows on Saturdays, Owner Danny Rolin said.

Rolin owns the sportatorium, along with good friend, Kevin Presley. Rolin is a Pensacola, Fla. native, but lives in Atmore. Presley is an Atmore native.

“I got into wrestling in early 1996,” Rolin said. “I always wanted to do it. I was one of Robert Gibson’s first students.”

Gibson is an American professional wrestler who was a part of the tag-team duo, Rock-N-Roll Express with Ricky Morton. The tag-team was inducted into the 2017 class of the WWE Hall of Fame. Gibson runs All Pro Championship Wrestling Academy in Douglasville, Ga.

Presley said he got into the business through Rolin.

“Kevin and I, we’ve known each other since 1997,” Rolin said. “We had a guy that was from here that I didn’t know that Kevin knew for a long time. He (Kevin’s friend) came down and talked to Robert, and became our manager, and my tag partner.”

After some time, Rolin and Presley went in separate directions — Rolin to work on the road as a wrestler, and Presley with the railroad tracks.

Two years ago, Rolin and Presley’s roads came back together and the origins of Dirty 30 SHW began to percolate.

“We reconnected, and we had an opportunity to buy a ring,” Rolin said. “Then, one thing after another just presented itself to us. It was like it was meant to be.”

A short time later, the building on Ridgeley Street was acquired through Atmore Realty’s Jennifer White.

Rolin said he wasn’t sure how the community would receive the wrestling sportatorium, but it’s been nothing but welcoming.

An open house will be held at Dirty 30 SHW on Sat., Aug. 18, for those interested in coming to see what the new place is about.

New mural being painted on side of chamber building

With the sun beating down on her, Patti Gillespie continues work on Atmore’s newest addition. Gillespie is painting a 12-foot-by-30-foot... read more