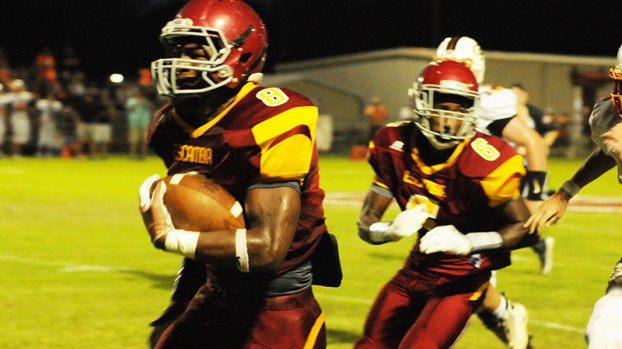 Escambia Academy’s Patrick McGhee rushed for 251 yards on 15 carries and scored two touchdowns to help lead the Cougars to a 41-7 victory over Clarke Prep tonight at Bachelor Field in Canoe.

The Cougars got off to a slow start in the game, but picked up momentum in the latter part of the first half, scoring on three straight possessions.

Jabo Davis scooted in from 3 yards with 5:46 left in the first, and Daughtry McGhee ran a pick six back 78 yards after Patrick’s first touchdown of the night.

To put the game away, EA’s Shannon Wheat rushed in from 7 yards with 5:32 left in the second quarter.

Clarke Prep helped the Cougars extend their lead on another pick six as Chase Bell ran the ball back 60 yards for the score with 51. 2 seconds left in the first half to make it 34-0.

“We said going into the game that we really wanted to bear down, and run the ball tonight,” EA head football coach Hugh Fountain said. “I know it was going to be a challenge for us to get after them and stay physical.”

Parts of the early woes were found on the offensive front for EA.

Fountain said the team did change some people up front to give a different look.

Fountain said this week, a lot of players played one side of the ball.

“We weren’t playing as many on both sides of the ball, and were able to catch our breath,” he said. “Tonight, the key was that we were good in the basics and on the key fundamentals. Tonight was a good night for us.”

Clarke Prep scored on a 2-yard touchdown pass with less than 6 minutes to go in the third quarter.