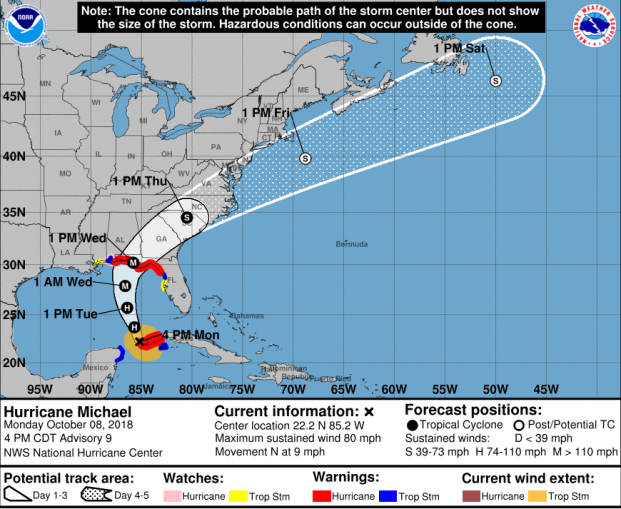 Rainfall totals to be between 1.5-2 inches

EMA Director David Adams said Michael is in the southeastern Gulf of Mexico, and has sustained winds of 75 miles per hour. He said as of 3:30 today that Michael is moving north at 7 mph.

“The current forecast calls for Michael to continue to the north to north-northeast through tomorrow evening and then start a turn to a more northeastern track,” Adams said. “If this holds true, this track will take the eye to the east of our area.”

Adams said Hurricane Michael is a large storm on a geographical scale, and will cover a large area.

“Michael is forecast to intensify to a Category 3 storm (at least 120 mph sustained winds) before making landfall sometime Wednesday,” he said. “This forecast can and may change. A small change in the timing of the front that is expected to steer the storm or a small change in the forward speed can mean a change (better or worse) in the impacts to our area.”

Adams said if the forecast holds true, the county should see windy conditions with the winds coming from the east, and then shifting to a north direction.

He said rainfall totals for Escambia County are expected to be in the 1.5–2-inch range.

The heavier winds and rainfall will be in the eastern portions of the county and diminish some toward the west, he said.

With the hurricane, small isolated tornadoes may be present and localized flash flooding is possible, he said.

“If you must travel as conditions deteriorate, do so with caution,” he said. “Some trees may be downed and we may see some power outages.”

Ivey declares state of emergency ahead of Michael