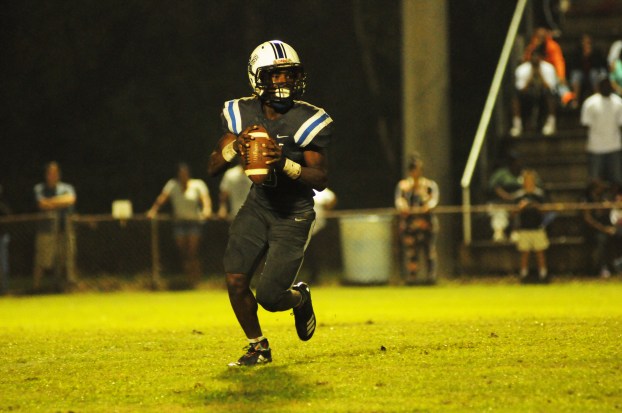 Jordaun “JP” Patterson scatters to make a play and the ball effortlessly leaps off of his hand.

This is a common occurrence with the Escambia County senior quarterback.

Patterson, who started as the Blue Devils’ signal caller last year, along with this season, has been playing football since he was in the peewee league in Century, Fla.

The Atmore native said he started playing football in Atmore while at Escambia County Middle.

Patterson said the reason why the football leaps off of his hand is because of practice.

“It’s just drills every day,” he said. “There’s not a day we don’t do quarterback drills. We don’t shorten them, or cheat them.

“The more you do it, it becomes second nature to you,” he said.

The second-nature nature of the position for Patterson has led him to a good season so far.

So far this season, Patterson has racked up 1,199 yards in passing and thrown for 11 touchdowns. He’s added 224 yards on the ground and scored four touchdowns.

When asked about how head football coach Rico Jackson asked him to be the quarterback, Patterson said it came out of nowhere.

“He asked if I could do it,” Patterson said. “He asked if I feel like it. He told me if you battle for the spot, and give it your all, then I’d end up winning it.

“I had a couple bad games, but he (Jackson) told me to keep my head up,” he said. “I stuck with it, and got better with it.”

Patterson said last year, the team was trying to buy into the situation with Jackson at the helm, but this year, it’s different because the team knows its coach and is dedicated to the cause.

The Blue Devils are now 5-2 on the season, and will host top-ranked UMS-Wright this week in region action.

Patterson, who also plays basketball at ECHS, said he likes football because it offers something different.

“I was playing football longer than I started playing basketball,” he said. “Basketball just came along as I got older.

“Football brings you closer together with your teammates,” he said. “In football, you can do what other sports can’t do.”

Patterson is the son of Betty Patterson of Atmore.

WALKING FOR THEIR LOVED ONES