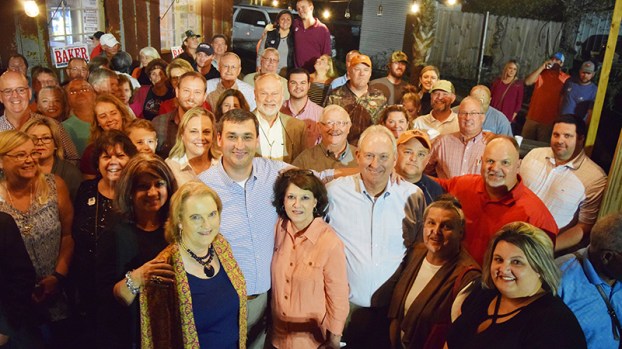 “I’m excited. I’m trying to let it all sink in. I’m thankful to the citizens and to Escambia County,” Jackson said.

Jackson gave credit to his mother and father saying they have stuck through him through “thick and thin.”

An excited and emotional Jackson said that starting today, “Escambia County is going to grow leaps and bounds in law enforcement. We are going to do things no one ever thought this county could do. At the end of the day, we are one county. We are one community.”

Jackson promised supporters gathered at the Fish Bowl that his administration will address the jail and get training for employees.

“We are going to get new technology,” he said.

Jackson received 53 percent of the vote to Lambert’s 46.96 percent.

Calls to Lambert were not returned as of press time on Tuesday.

“I am glad that Escambia County is ready for a change,” he said. “I’m glad that they placed their faith in me.”

In the race for District 7 on the Escambia County Board of Education incumbent Coleman Wallace defeated Mandie Thompson 958-341.

The majority Escambia County voters voted in favor of all four statewide amendments.