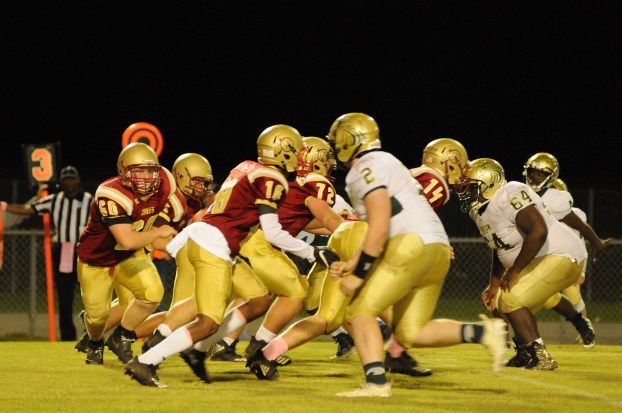 Chiefs ready for Graceville in playoffs

Northview is back in the playoffs.

The Chiefs will take on Graceville, Fla. this Friday night at 7:30 in Bratt in the FHSAA’s Class 1A region quarterfinal.

Chiefs head football coach Derek Marshman said Graceville is probably the most athletic team they’re going to face all season up to this point.

Sorey also plays at running back, wide receiver and linebacker. Claiborn plays at linebacker as well.

“Fortunately, we’ve played against some good athletes this season,” Marshman said. “These are going to be the best athletes we’ve seen all season long.”

This is the first time since Northview has been in the playoffs since the 2016 season.

During the season two years ago, the Chiefs were 6-4 like this year.

Marshman said the biggest difference between the two is that this year, the Chiefs are playing their best football right now.

“Right now, we’re peaking and we’re continuing to get better each week,” he said. “I think this team is a little more hungry. Last year, with us not making the playoffs for the first time in a few years, they have a chip on their shoulders.

“They want to continue to prove to everybody they belong,” he said. “Lastly, it’s unity. This team is more together, from a coaching staff, players and relationship between the coaching staff and players. We enjoy being around each other.”

Marshman said it wasn’t difficult to get the players focused on the task at hand last week in a 49-21 win over Freeport, Fla. The winner of the NHS-GHS game advances to face the winner of Baker-Freeport next week in the semifinals.

In the win over FHS, the Chiefs put together a good first half, leading 42-7 at the break.

“We treated that as a playoff game,” Marshman said, adding that the kids were focused all week last week. “The consistency they showed and the energy they played with and practiced with was remarkable. When they did that Monday through Thursday, and came out Friday, you could tell the team wanted to prove a point. They had a different mind set.”

Marshman said this week’s game is another good opportunity for the Chiefs.

“We’re really excited,” he said. “We met (Sunday), and we had breakfast together (to find out who they’re playing). Florida does this thing where they have a TV show when they’re releasing the brackets.

“We watched that show together, I told the guys that I’m really proud of what they accomplished already. This is our first home playoff game since 2012.”

Marshman added that the 10 previous games they’ve played was a preseason to get to where they are now.

“This is the real season,” he said. “This is what we’ve worked for since January, during the off season workouts in the summer. Our goal is to be 1-0 each week. That’s all we ask for from our kids, and we don’t care if a win is pretty or ugly, just as long as we are 1-0 and have a chance to play.”

By David Rainer Department of Conservation and Natural Resources October has been a special month for the Alabama Department of... read more