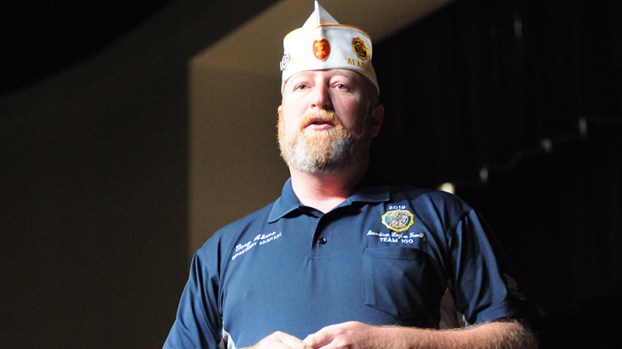 Staff Sgt. William Akers had one message for Escambia County High School students at the school’s Veterans Day Assembly on Nov. 8 — choose the hard right over the easy wrong.

Akers was the guest speaker at the assembly, which paid tribute to veterans who have served and are serving in the United States Armed Forces.

Akers served as a flight engineer and platoon commander while in the U.S. Army. He racked up several accommodations during his time in the service.

He spoke about patriotism, and that there is nothing wrong with being proud of your country, he said.

“In the state, 8 percent of the population is serving in the military,” Akers said.

Akers encouraged the listening students to find their true happiness, and that the only way to get there is to make the right choices, like studying over playing video games, and reading instead of watching TV, to name a few.

“Choose a hard right over an easy wrong,” he said.

On the current military, Akers said those who are fighting here and abroad are “sacrificing their freedoms for yours.”

“I’m so glad to be here today, two days after we exercised our God-given right as citizens,” he said about voting on the General Election.

Akers said the United States Flag is a bonding agent for all citizens.

“The United States is a family,” he said.

Akers said Veterans Day is a day set aside to honor the veterans who have served.

Not only must citizens go up and thank a veteran for his/her service, we must ask them about themselves and how we can help them, he said.

“Choose a hard right over an easy wrong,” Akers said.

The assembly was coordinated by the school’s Triton Club, and included a reading of the history of Veterans Day, the ECHS Marching Band playing the armed forces medley and a mural tribute to the veterans.

Three individuals were shot early Sunday morning at a club on Carver Avenue in Atmore, according to police officials. Chief... read more