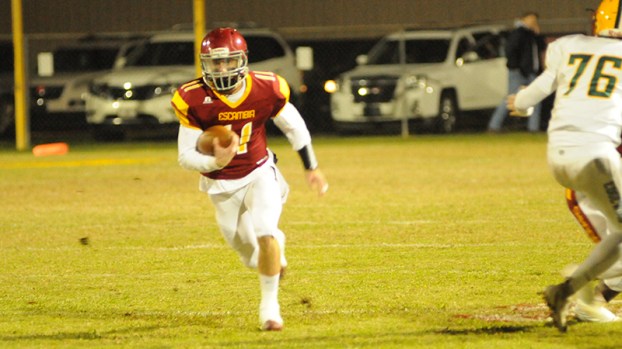 1 more game for it all

Six months of work culminates for Escambia Academy on Friday as the Cougars face top-ranked foe Autauga Academy in the AISA Class 2A state championship in Veterans Memorial Stadium at Troy University.

This week’s game is the third straight championship in a row EA has made. All three games have been against the Generals. EA won last year’s battle 30-20. AA won in 2016 28-21. Additionally, the state championship game is the fifth time both have played each other in the last couple of years.

For Autauga, it starts with starting quarterback Tripp Carr. Carr completed 11 of 13 passes for 353 yards and four touchdowns. He is the first AISA player to surpass 10,000 career passing yards in the win over SCA, according to the Montgomery Advertiser. He also had three rushes for 45 yards and a touchdown.

“When the quarterback has been their ring leader for them for so long; it’s obvious that he runs the show for them,” Fountain said. “He’s very good. I have a lot of respect for him. He runs the ball well, and he throws the ball well. He’s a good dual threat quarterback.”

Running backs Ferontay Cutler and Derrion Ashley provide a threat in the backfield.

Making it back to the state championship game for Fountain — this week marks his fourth appearance — is a tribute to the players, and their determination to get there, he said.

“It’s very difficult to fulfill expectations,” Fountain said. “The No. 1 hardest thing in athletics is living up to expectations. We definitely want to win the game. That’s the ultimate prize.

“We are the 2A state champions,” he added. “Obviously, we have our title to defend, but it’s a totally different team.”

Fountain said he asked each senior class what sort of legacy are they going to leave.

“Every class stands on their own two feet,” he said. “What has your class done? Say to yourself, ‘what do those their legacy say?’ This is what their legacy is. They’ve won football games. They’re winners.”

Fountain said it’s been a long season for the Cougars (10-2), and it all started in June and ends Friday.

“This time on Friday night, the season will be over with,” he said. “Either we’ll be state champs or runner up. Our ultimate goal (is to win).”

The City of Atmore held its annual Veterans Day program on Nov. 13. All veterans were honored during the service,... read more